Controversial OAP and Free the Sheepie Leader, Daddy Freeze has weighed in on Dr Dre and Nicole Young’s divorce saga which has taken several dramatic turns in the last few weeks.

The media personality also wondered why Nicole will be asking for $2 million a month, adding that the claim of her supporting Dre’s career is “bullsh*t” because she didn’t produce any hit song with him.

“Many women are suffering, yet stuck in bad marriages here in Nigeria.

Abroad, in many instances it’s the other way around; many men are stuck in bad marriages because of the heavy settlement payouts and the costs of divorce.

Dr Dre’s wife asking for $2 million a month is a clear example…. What’s he going to be left with in 5 years?

Cut the “she supported his career” bullshit! did she produce the damn hit songs with him?

This is why many men in America stay in dead marriages.

I’m here to bring a balance to the narrative, not turn women into agents of oppression and men into victims, please let’s be guided. ~FRZ” 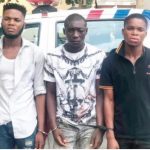