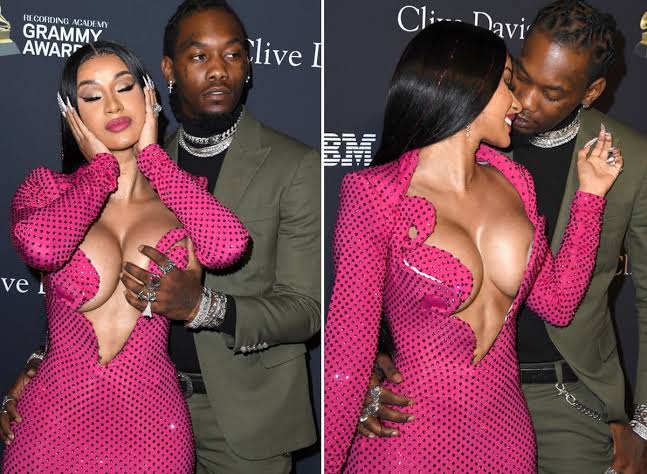 Cardi B Files For Divorce From Offset, Says Their Three-Year-Old Marriage Is ‘Irretrievably Broken’

Popular female rapper, Cardi B has filed for divorce from her Migos rapper husband, Offset, after just three years of marriage.

KanyiDaily recalls that Cardi B, whose real name is Belcalis Marlenis Almanzar, married the Offset, real name Kiari Cepheus, in a secret ceremony in September 2017.

Follow-up reports have confirmed that the divorce is contested, with Cardi B listed as the plaintiff and Offset as the defendant.

In her divorce filing, Cardi B, states she “is seeking primary physical custody as well as legal custody” of their two-year-old daughter, Kulture Kiari Cephus.

The Bodak Yellow hitmaker is also asking that Offset contributes to her “support and maintenance”, although the exact amount she is requesting for child support is unclear.

The divorce documents also states that the couple are living in a “bona fide state of separation” and that their marriage is “irretrievably broken”, adding that tere are “no prospects for reconciliation”.

A divorce hearing has been set for 4 November at 10am. It is unclear what happened to cause them to split up but, as it generally goes, the world is speculating on all sorts of things that could have led them to this point.

The surprise end of Cardi and Offset’s relationship has sparked a whole bunch of theories regarding what could have happened, including many people believing that Offset could have cheated on his wife again.

In Fall 2018, the couple began the divorce process before dropping it altogether and reconciling. That time, their break-up happened because of cheating allegations against the Migos rapper.

With that in mind, people are assuming that a similar story could be bubbling because Offse’s infidelity have alway been the breaking point for Cardi B.

The news about their divorce is still fresh but, already, fans of the couple are expressing their heartbreak and hopelessness on social media.

A good chunk of their supporters had forgotten all about their drama from a few years ago, which is probably what the couple wanted, but it looks like love didn’t win this time around.

KanyiDaily had reported how Offset put up a drama while trying to reconcile with Cardi B during her performance at the Rolling Land Festival in 2018, but he ended up making a fool of himself after so much effort.

Despite their irreconcilable difference at that time, Cardi B pleaded with her fans to back off from attacking Offset as it isn’t going to do her any good. She went on to say that he was family and so he should be respected by her fans.