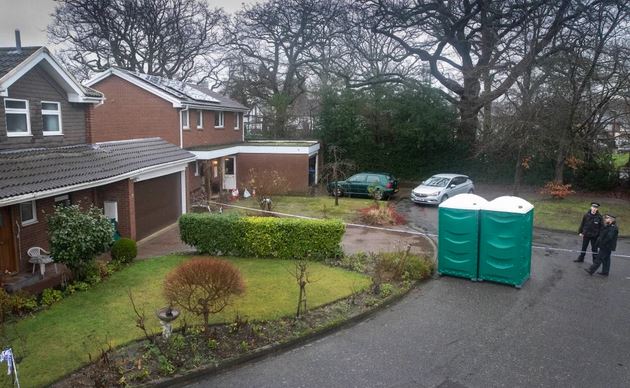 Horror! Man Brutally Kills His Own Mother With A Sword, Hides Her Head Inside Freezer

A man stabbed his 86-year-old mum with an ornamental sword then decapitated her and put her head in the freezer, a court has heard.

Opening his murder trial at the Old Bailey, Alexandra Healy QC said: “It is the prosecution case that at around midday that day, in the kitchen of the address, the defendant stabbed his mother in the chest with an ornamental sword, killing her.

“Brandishing that sword in the dining room of the property he argued with and threatened to kill his father.”
The court heard Tarver had downed a bottle of vodka and six beers the night before the killing.

When Colin awoke, he saw his son was wearing a female nightie or negligee. After preparing a breakfast of poached eggs, Colin heard screams from his wife.

Ms Healy said: “He heard a short, sharp scream, and ran from where he was into the dining room.

“He could tell she was laying on her back. Suddenly, the defendant appeared in front of him holding an ornamental sword that he had owned for sometime.

“He was holding the sword out in front of him. He said something to the effect of ‘I am going to kill you’ or ‘I have to kill you’.

“He had a demented look in his eyes which he said were bulging.”

During a struggle, his father managed to disarm the defendant, before leaving to alert police, jurors heard.

Ms Healy said: “It appears that, whilst the police were making their way to the address, the defendant decapitated his mother, placing her head into the freezer in the kitchen.

“And he amputated her left ring finger, which he placed into a kettle.”

Tarver began to clean up, washing himself and the knife he used to decapitate his mother, it was claimed.

When police arrived, he came to the front door “waving a Union Jack and saying he surrendered”, Ms Healy said.

Following his arrest, Tarver heard his dad was being spoken to by police and allegedly commented: “Oh of course his wife.

“His wife is in the freezer.”

On arrival at the police station he said he was “sorry for killing her” adding that he “must repent my sins”, the court heard.

During a mental health assessment, Tarver went on to explain how he killed his mother, jurors were told.

He was taken to a mental health hospital where he remained until March when he was deemed fit to be interviewed by police.

Tarver denies murdering his mother and making a threat to kill his father.

When police arrived, Tarver came to the front door ‘waving a Union Jack and saying he surrendered’