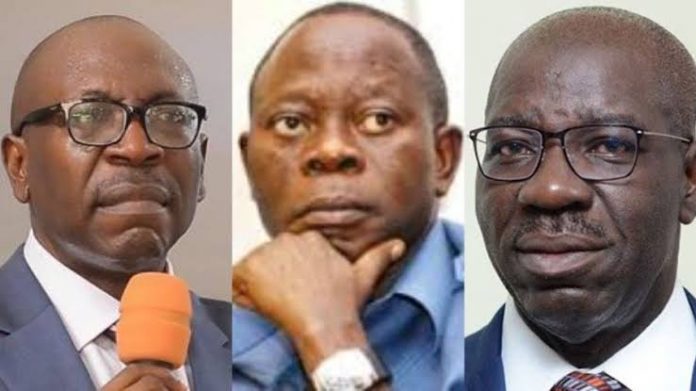 The peace meeting which held at the palace had in attendance the three main gladiators -former National Chairman of the All Progressives Congress, APC, Adams Oshiomhole, Edo Governor and candidate of the Peoples Democratic Party, PDP, Godwin Obaseki and Pastor Osagie Ize-Iyamu of the APC and their party’s leaders in the state.

The Omo ‘N’Oba N’Edo Uku Akpolokpolo, Oba Ewuare II called the meeting ahead of the forthcoming governorship election in the State.

As preparations for the September 19 gubernatorial election in Edo State intensify, the political tension in the state has aggravated in recent days, between Obaseki, candidate of the People’s Democratic Party (PDP) and his main rival, Osagie Ize-Iyamu of the All Progressives Congress (APC).

Obaseki’s second term bid has been assailed by disturbances, and war of attrition against political foes who have determined to see his back out of the Government House without him having a chance for a second term.

For a very long time now, Obaseki has been at loggerheads with his predecessor and erstwhile benefactor, Adams Oshiomhole, who until recently was the national chairman of the ruling APC.

After Obaseki’s controversial disqualification from the APC primary election believed to have been influenced by Oshiomhole and the subsequent emergence of Ize-Iyamu as the APC candidate, it seems Oshiomhole, appears hell-bent on making sure that Obaseki is defeated in the September 19 gubernatorial election or perhaps, removed from office before the election.

Though the Independent National Electoral Commission (INEC) has warned political parties and their candidates that there would be no result if there is violence in the election; observers say that the electoral body and security agencies must go beyond lip service and make sure that there is punishment for anyone found causing trouble in the state before and during the election.