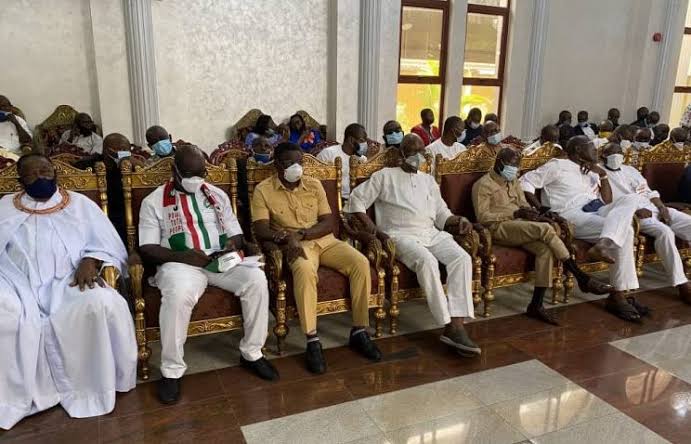 Incumbent Governor Godwin Obaseki of Edo State, candidate of the Peoples Democratic Party (PDP) in the September 19 governorship election, and the candidate of the All Progressives Congress (APC), Pastor Osagie Iyamu, beside other candidates, on Wednesday at a meeting with the Oba of Benin at the palace, promised to work towards peaceful election in the state.

Governor Obaseki on his page on the social media platform declared: “Earlier today, I and other political actors in Edo State were invited to the Palace of the Oba of Benin, His Royal Majesty, Omo N’Oba N’Edo Uku Akpolokpolo, Oba Ewuare II.

“Condemning the recent attack on my re-election campaign convoy at the Palace gate, our highly revered monarch called on us to eschew violence and embrace peace and tolerance ahead of the forthcoming gubernatorial election in the state.

“HRM sought for assurance from all political gladiators and a halt to the rising shooting and violence in the state and ensued for peace between one and all.

“On my part, I assured the royal father as the Executive Governor and Chief Security Officer of the state, I have sworn to uphold the constitution of the Federal Republic of Nigeria and protect the lives and property of our people.

“Having committed enough resources to ensure the safety of the citizens of the state, I will never encourage violence, as it would be my responsibility to do anything which would lead to the breakdown of law and order.”

Pastor Ize-Iyamu also acknowledged the goodwill for peace in the state during and after the election which the royal father had sought to commit all stakeholders to uphold. He expressed gratitude to the Oba for his intervention, promising to adhere to peaceful conducts.

Pastor Ize-Iyamu on his page on the social media platform wrote: “I am grateful to our father, the Oba of Benin, Oba Ewuare II, for his fatherly intervention and timely call for peace. “We have his candid message, and we, the APC will continue to maintain our peaceful approach and rally the people across party lines, to shun divisiveness and respect the laws guiding the electoral process.

“We are one people and politics cannot divide us. Ovbi’Oghonwan nei bun aro – Oba Gha to kpere, ise!”

Ize-Iyamu also disclosed that he embraced incumbent Governor Obaseki at the meeting at Oba’s palace to demonstrate his resolve for peace in the state. Ize-Iyamu added that the election is not a do or die affair.