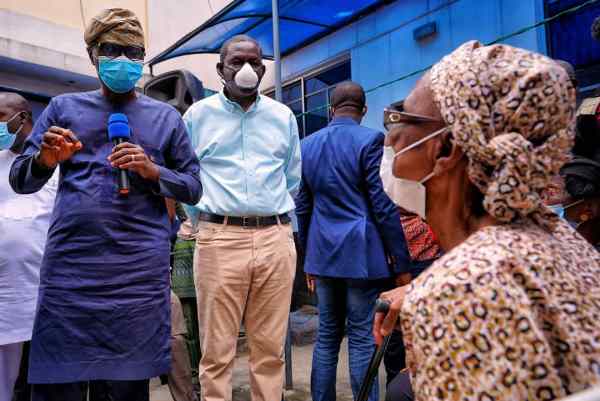 Lagos State Governor, Babajide Sanwo-olu, on Saturday visited the site of the helicopter crash at Salvation Road in Opebi area of the State 24 hours after the incident to assess the damage of the crash.

Speaking to journalists after looking round the crash site and meeting with owners of affected buildings, the Governor promised that Lagos State Government would carry out integrity tests on the buildings and do necessary repairs and assist the affected families.

Recall that a Bell 206 Helicopter, belonging to Quorum Aviation, was traveling in from Port Harcourt, the Rivers state capital with two crew members and a passenger before it crashed in between two residential buildings in the Opebi area of Lagos at mid-day on Friday.

He said: “I am here to do a real on the spot assessment and I have seen things for myself. We thank God that as painful as the incident might be, the damage was not beyond what we have witnessed. We are pained by the death of the three people on board but we thank God because it could have been worse than that. The affected buildings are residential homes that have citizens living there. As at the exact time the helicopter crash happened, a lot of people were not in the premises and even the elderly people that were around and in their rooms. But as God would have it, nothing in term of fatality happened to people on the ground. So, we need to thank God. If not, fatality may have been a lot more than what we are talking about. 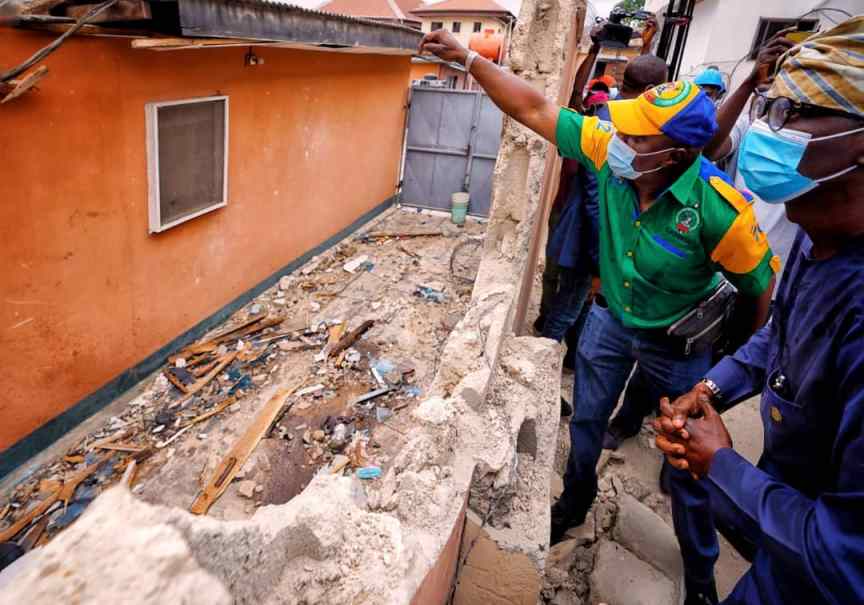 Lagos State Governor, Mr. Babajide Sanwo-Olu, being shown round the scene of the helicopter crash

“As you can see the people affected are senior citizens; they are people in their 80s and 70s that I have come to condole with and also thank God for them. We have seen the level of destruction and damages. Tests will be conducted to understand the integrity of the buildings and once that is ascertained today or tomorrow, we will start work with the federal agencies. We will start the reconstruction and renovation of the places affected by the crash; the rooms, walls, tents and ensure that we quickly bring respite to the senior citizens that have been affected.

“From Monday, we will start rebuilding the damaged structure and also assist in any areas the owners of the buildings need our assistance. We will also assist the senior citizens wherever they need help. We know that the incident has had some impact on them. We will give them whatever support we can give them to reduce their psychological, physical and emotion hardship, which may have been caused by the incident. We would be doing that for them as a government. The whole essence of governance is to ensure that once your citizens are affected like this, government need to rise up.”

Governor Sanwo-Olu also commended all the federal and state agencies for their quick response by moving to the site of the crash shortly after the helicopter crash.

“I want commend all our frontline workers, all the emergency staff that turned up yesterday with citizens in the neigbourhood that turned out in large number to help,” he said.

They prayed for Governor Sanwo-olu, saying his tenure in government will be successful, noting this is the first time something will happen and a sitting governor in Lagos will make a quick response.

They also thanked several agencies of Lagos State for making quick response to the crash site and clearing it. 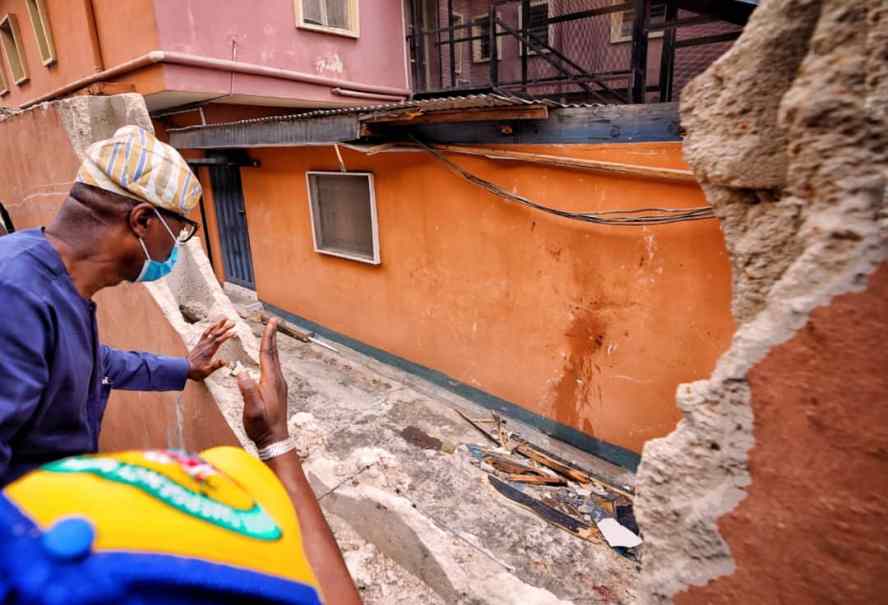 In her address, one of the owners of the affected buildings, 77-year old Oluwayemisi Oluwole said the repairs promised by the governor should be done quickly for her to be able to move back into her residence.

“I hope somebody will come and assess the degree of the damage and that should be done quickly because I have not entered the house since yesterday because I have been banned from entering the house.

“Since yesterday a lot of people came here without observing any COVID-19 protocols. In my house now, I can count 20 face masks on the floor. So, I want to appeal to government to come and help us to sanitise the place. I am very happy that you (Governor Sanwo-Olu) have blood that you know something happened to your subjects and you decided to visit them. Your reign will be sweet in Jesus name.”

He said their response showed the commitment of the Babajide Sanwo-Olu administration to the welfare of the citizens of the state.