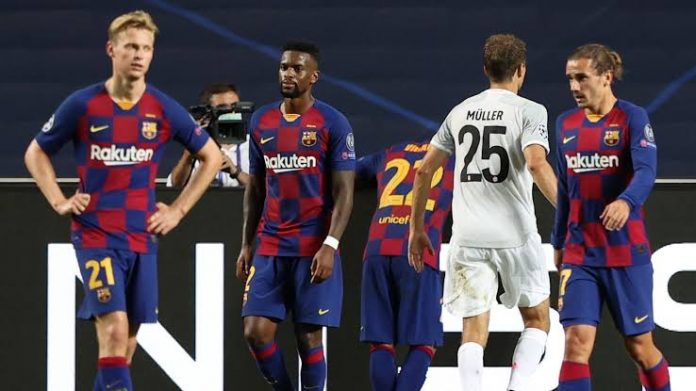 Barcelona’s 8-2 thrashing at the hands of Bayern Munich in the Champions League quarter-final on Friday night was not the worst defeat in the club’s history.

Friday evening’s match at Estadio da Luz was the first time in 74 years that the Blaugrana had conceded eight goals in a game – when they were beaten 8-0 by Sevilla in the Copa del Rey in 1946.

But the Bayern masterclass was short of the biggest loss ever suffered by Barcelona, with the Catalans twice losing 11-1 in the 1940’s.

The most humiliating of these defeats came against El Clasico rivals Real Madrid in the Copa del Rey in 1943.

After winning the first leg of the semi-final 3-0, Barcelona completely fell apart in the second leg to lose 11-1.

Three years earlier, the Blaugrana were beaten by the same scoreline in a La Liga match against Sevilla.

Incredibly, Barcelona took an eighth minute lead in the match before all 11 of Sevilla’s goals came within an hour period – from the 23rd to 83rd minutes.

And at the end of the season, Barcelona finished in fourth in the La Liga standings – one position ahead of fifth-placed Sevilla.

In 1935, Barcelona were also beaten 8-2 by Real Madrid with Fernando Sanudo scoring four goals – the most ever by a single player in a fixture between the two sides.

It didn’t look like Friday’s match against Bayern was going to be a bloodbath, when Bayern defender David Alaba put the ball through his own net in the seventh minute – cancelling out Thomas Muller’s strike 180 seconds earlier.

But three more Bayern goals – courtesy of Ivan Perisic, Serge Gnabry and Muller – before half-time put the Bundesliga champions in a commanding position.

Luis Suarez gave Barcelona hope of an extraordinary comeback with his goal 13 minutes after the restart, but Joshua Kimmich found the net shortly to extinguish the La Liga team’s chances.

Between the 82nd and 89th minutes, Bayern scored twice through Philippe Coutinho and once through Robert Lewandowski to put the exclamation on a horrible night in Barca’s history.

This season has been the first that Barcelona has gone without a single trophy since the 2007-08 campaign.