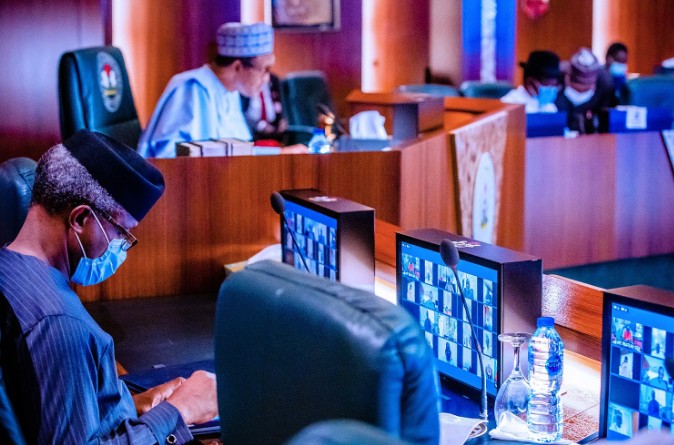 President Muhammadu Buhari in a meeting with Osinbajo and service chiefs

Nigeria‘s President Muhammadu Buhari is currently meeting with Nigeria’s security chiefs to discuss the worsening security situation in the country, according to Premium Times.

In attendance is the Vice President Yemi Osinbajo, Chief of Staff to the President Ibrahim Gambari, National Security Adviser Babagana Monguno and some ministers.

The heads of the army, navy, air force, police, State Security Service, and Directorate of Military Intelligence are also attending the meeting.

The meeting is holding about a week after armed persons attacked the convoy of the Borno State Governor, Babagana Zulum, in Baga, a community with a history of Boko Haram attacks.

Mr Zulum has, however, said he believes the attack was carried out by soldiers.

The attack on the governor occurred about a day after at least one person was killed in Boko Haram attacks on Maiduguri.

Many people have also been killed in renewed violence in Southern Kaduna.

Tuesday’s security meeting is expected to deliberate on some of these key security situations.