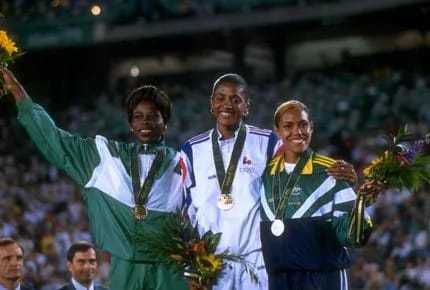 Falilat Ogunkoya made history on July 29 1996 as the first athlete to win an individual Olympic medal for Nigeria courtesy of her 400m bronze at that year’s Olympic Games in Atlanta Georgia USA.

Ogunkoya raced to a new 49.10 seconds African record enroute to her historic medal win which opened the floodgates of medals for Team Nigeria at the Games. Mary Onyali, 200m bronze and Chioma Ajunwa, long jump gold as well as a 4x400m relay silver followed in quick succession.

It was Ogunkoya’s first appearance in the final of an individual event at the Games and she stunned the world with her performance.

It was the first and so far only time in the history of the event at the Olympics that two Nigerians (Ogunkoya and Fatimah Yusuf) will run in the final, barely a year after both ran in the final at the World Championships in Gothenburg, Sweden.