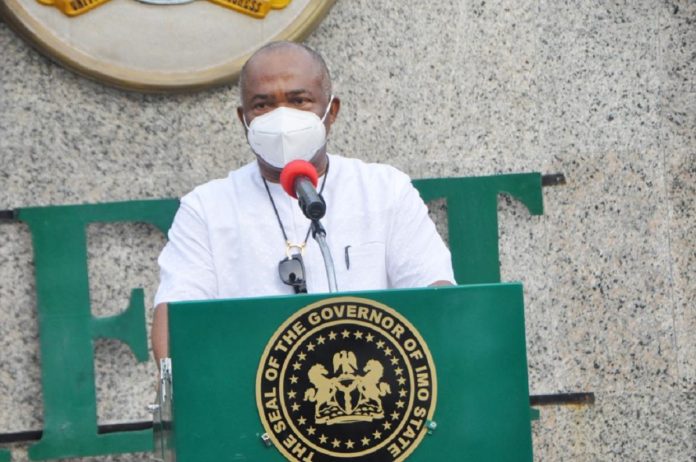 When on June 22 1986 the legendary footballer Diego Amando Maradona scored a “foul ” goal with his hand at the 1986 FIFA World Cup, he attributed it to the “hand of god”. Even though at the spur of the moment when he scored that “illegal” goal, the referee being the umpire ruled his goal as valid, yet he himself and many others knew that it was not really a valid goal. If that event had occurred these days, perhaps with the aid of the Video Assistant Refree (VAR) the reverse would have been the case. However that is now history.

It is no longer news to many the travesty that took place in Imo State on the 14th of January, 2020 when the Supreme Court of Nigeria surprisingly and clearly against every logical and apparently legal reasoning declared Sen. Hope Uzodinma governor of Imo State. That decision saw to the premature exit of what would have been the best government in the history of Imo State next to that of late Dee Sam Mbakwe.

However, Sen Uzodinma, Fr. Ejike Mbaka and a few others who revelled in that injustice, like Maradona, refered to it as the “hand of god”. But truth remains also that like Maradona, Uzodinma, Fr. Mbaka and others knew within themselves that it was a “foul goal”. And that what they refered to as the hand of god was indeed the hand of man viz a viz the cabal of whom the late Abba Kyari and Isa Funtua, plus the erstwhile national Chairman of the All Progressives Congress (APC) Comrade Adams Oshiomhole had  been fingered as accomplices.

I say this not out of sentiments but purely on facts as credible social-political indices points clearly to that. For example it was clear to any right thinking person that on that fateful day of the infamous judgment, the whole of Owerri and Imo State was thrown in to a mourning mood. The people did not jubilate over Uzodinma’s victory, instead almost everyone wore long and gloomy faces on that very day. This showed clearly that the judgment clearly went against the wish of the people. And if we are to go by the famous saying that vox populi vox Dei (The voice Of the people is the voice of God), then it can be deduced from the people’s reaction that GOD indeed was not part of that travesty.

Granted, the bible says that power belongs to GOD and as such no one can be king without divine endorsement. But it will depend on one’s depth in the knowledge of spiritual matters to understand that statement. It might interest you to note that GOD sometimes “appoints” a leader to be annointed king and at another time “allows” a leader to be anointed. These two scenarios are very different. That is why the bible says in Hosea 8:4: “They have set up kings, but not by me: they have made princes, and I knew it not: of their silver and their gold have they made them idols, that they may be cut off.” So a leader can indeed be anointed without divine approval. I will give two biblical examples to buttress my claim.

First is the case of Saul in the bible. After GOD had brought the Israelites to Canaan, He had wanted to be their king, ruling them indirectly through prophets and judges. However, the Israelites being carried away by the practices in other kingdoms which had human kings ruling over them, demanded that Prophet Samuel annoint a king over them. They rejected Samuel’s admonition that they should be content with the fact that YAHUWAH ELOHIM (YAHWEH/GOD ) was their king.

When Samuel took the matter to GOD, the LORD unwillingly “allowed” a king to be chosen for His people. He did so as a way of letting them taste the wickedness of a humanly chosen king as against the love of a GOD chosen king. And we know from history how Saul ended…He was booted out eventually and made way for GOD’s “appointed” or “chosen” one, David. And we can see that from then on the kingship of Israel was handed over to David and his lineage for all eternity even until YESHUA HAMASHIACH (Jesus Christ) who Himself is the son of David.

Conversely, when GOD allows a king over a people, it is usually for the purpose of chastising them  and to demonstrate His power. That was what happened to the Israelites in Egypt. GOD allowed Pharoah to rule over his people to chastise them and according to Exodus 9:16 : “And in very deed for this cause have I raised you up, for to shew in you my power; and that my name may be declared throughout all the earth.”

This means that when a people fail to live according to divine principles and godly standards, GOD ALMIGHTY could punish them as a sign of His anger and then turn back to use that leader as a scape goat. That was what happened to Saul and Pharoah.

The above example is archetypical of what happened in Imo State in January 14, 2020. GOD allowed Sen Uzodinma to become governor briefly, in order to chastise Imo people just like he is doing now. But it is obvious that Imolites have completed their term under divine wrath and He has returned to restore a government of “actual” prosperity and delivery of the dividends of democracy. At this juncture it has become crystal clear to all reasonable persons that while Uzodinma is a “king” chosen by man, Ihedioha in actual fact is the “king” chosen by GOD.

However,  we must sound it loud and clear here that GOD is angry over the brazen injustice metted  out not only to Ihedioha but the people of Imo State. Power is a sacred ordinance and should not be toiled with. Anyone who tries to force his way to power without divine consent usually ends up in a bad way. Anyone who tries to cling tenaciously to power against divine consent is swimming against the tide and can not succeed. Those who usurp or steal power are also never left out when divine judgment comes calling. Even those who aided them to steal power are not also spared.

Afterall where are Abba Kyari, Isa Funtua and Oshionhole now? And all these happened so swiftly to show you that the day of reckoning has come, and that the “real  hand of GOD” has come! And am telling you that many more casualties are underway. That is why it is advisable for those concerned to throw in the towel while there is still time. For one may swim Otamiri, Imo River and even River Niger without oxygen and come out unscathed. But no one who swims the Atlantic Ocean without oxygen comes out alive. No one can fight GOD and win, as it is written: “Who can battle with the LORD”?