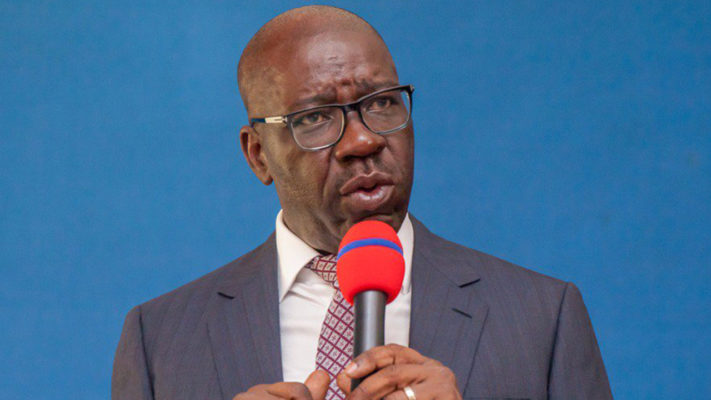 I’m not cause of your misfortunes, you joined the godfather against me – Obaseki fires back at APC chieftain

Governor Godwin Obaseki of Edo State, candidate of the Peoples Democratic Party (PDP) in the September 19 governorship election in Edo State, has fired back at a chieftain of the All Progressives Congress,   Captain Idahosa Wells Okunbo, known as Captain Hosa, over the accusation that the Edo governor is behind the misfortunes that have befallen his businesses after he had assisted Obaseki to become governor.

Obaseki in a long letter to Capt. Hosa, acknowledged the three-page advertorial he sponsored in some Nigerian newspapers of Monday July 20, 2020, entitled: “An Open Letter to President Muhammadu Buhari and The Good People of Edo State: Please Urge Governor Obaseki to Leave me Alone.”

The governor declared: “In your lengthy and convoluted missive, you accused me of being the mastermind of all your recent misfortunes, which range from the sublime to the ridiculous.
“I sincerely empathise with you over these unfortunate and negative incidents but hereby state without equivocation, that I am innocent of all you have accused me of.”

Obaseki  stated: “those who have worked with me can attest to the fact that I do not have the propensity to inflict evil or pains, especially, of the scale you alleged, on any man or woman.

“I couldn’t have been shopping for businesses abroad while at the same time destroying the ones owned by Edo sons and daughters like you. “My background and record bear witness to the fact that all my working career have been devoted to creating, supporting and sustaining businesses and investments.”

Obaseki further said: “Even beyond my personal policies, I am under oath as Governor to guarantee the security and safety of persons and property and ensuring the greatest level of happiness to the greatest number of Edo citizens.”

Governor Obaseki, thereafter, provided corrections on some of Hosa’s allegations, as follows:

I. As Chairman of the National Executive Council Ad-Hoc Committee on Crude Oil Theft Prevention and Control, the records would indicate that the eventual report actually favoured you and your company, despite the strong complaints from the competition and some clients about the astronomical cost of the services offered by your company.

II. On the Secure Anchorage Area Ltd (SAA) operations, your accusation against me in this regard is blatantly false and without foundation. The Honourable Minister of Transport, Rt. Hon. Rotimi Amaechi, is alive today to bear witness to the extensive effort I made on your behalf to resolve your problems with the Nigerian Ports Authority (NPA).

III. On the complaints regarding the non-commissioning of your farm project by Mr. President, it would appear that you are not aware that the President had a mere five-hour visit to Edo State and his itinerary was entirely put together by the Presidential Protocol Team and further vetted by the Department of State Services (DSS). They came to the conclusion that the commissioning of your farm project could not be included on the President’s visit. Neither I nor the Edo State Government had anything to do with that decision.

The Governor remarked that as a brother, he has been struggling to situate the probable source of the retired Captain’s  outlandish claims and wrong assessment of his character. The attributed that Capt. Hosa’s perception to relating with the wrong people who misled him.

“Without a doubt, I am convinced that you must have been talking and consulting with the wrong people in your search for an honest assessment of my personality.

“It is disappointing that despite our close family relationship, you could allow yourself to be convinced that I would do anything to hurt you or your business interests.

“You will recall that over a year ago in my house (at the early stages when the intrigues of the godfather began to manifest), I had advised you to steer clear of the battle which was going to be an epic one to get rid of the choking influence of the godfather from our political life. “I knew at that time that the godfather was desperately shopping for allies of Edo South extraction to assist him in his obsessive quest to continue his choking and unproductive dominance in the affairs of our state.
“It is unfortunate that you fell prey to the recruitment drive of the godfather and you have now found yourself in the position where you are actively working against the interest of your own people.”

Governor Obaseki disclosed that he had received a fair share of attacks for undertaking to serve the people and develop Edo State. He added that ae has been humiliated, undermined and his age-old business and family name ridiculed by the godfather and his agents, simply because he refused to do his bidding, and deprive millions of Edo people the good life that they rightfully deserve.

Obaseki noted: “this is what comes with the terrain when any person involves himself in politics and the consequences that follow.

“In all of these, I have no regrets whatsoever. I am certainly not paranoid about anybody. I remain committed and focused because the wellbeing and gratitude of the people, on whose side I have chosen to fight, namely; civil servants, pensioners, traders, the youths, farmers, drivers and the millions of other professionals and non-professionals in our state, are sufficient rewards.”

The governor, however, expressed sadness that Hosa have made himself the face of the forces that seek the continuous dominance of the godfather in Edo politics and has, thereby, exposed himself to charlatans and opportunists who are now preying on his inner fears and insecurities to distort the real issues on ground.

Governor Obaseki said he is not opposed to Hosa’s decision to align with any political interest; he advised him to be conscious of the dynamics of politics.

Obaseki, accordingly, declared: “I respect your right to make your political choices and to support any political interests you consider appropriate. I also acknowledge your freedom to freely associate with any political tendencies that you find acceptable.

“But you must recognise that the world of politics is not a tea party and the choices that we make in life always come at a cost and we should all have the courage to bear and accept the consequences associated with those choices we have freely made.”