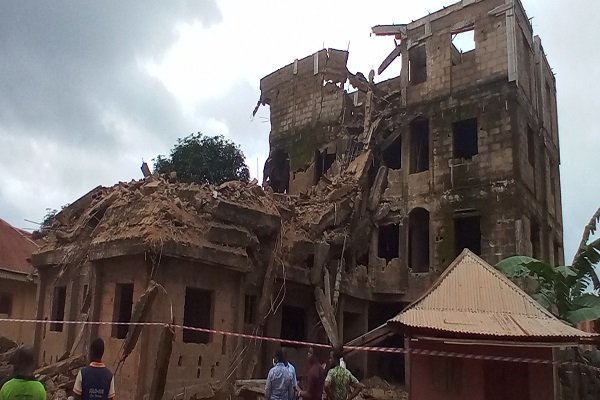 A report by The Nation, a three- storey building under construction in Abakaliki, capital of Ebonyi has collapsed.

The building is located at Nkaliki Road opposite the Abakaliki Local Government Council Headquarters.

The Nation reports no life was lost in the incident as workers had not resumed for work at the time the building collapsed.

Ugbala directed the immediate sealing of the site and demolition of the building.

Emegha directed the site engineer be arrested by the police immediately.

Udoku directed the ACTDB should produce staff that approved the building and all those in charge of monitoring the construction.

Onwe said preliminary investigation revealed the builders used sub- standard materials and the building had a lot of structural defects.

“The Engineer attached to the building did not do any professional work. The quality of iron rods, the mixture, concreting are not up to standard.

“You can see we have sealed it, there is a lot of compromises even from the foundation,” he said.

The chairman said the Board has launched an investigation into the incident, adding all those found culpable will be arrested and prosecuted.

“The building is going to be demolished today and evacuated. Every building has a town planner, an Engineer and a professional builder attached but in the course of construction these people compromise

“This structure wasn’t approved during my time but we take responsibility for it because government is a continum.

“We will trace the file to know if it was actually approved for three story and if it followed the stipulated standard.

“We will make arrests and prosecuted them as soon as possible,“ he said.