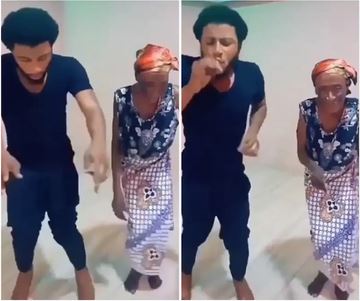 So Cute! Nigerian Man And His Grandma Set Internet On Fire With Lovely Dance Steps (Video)

The man and his grandma

A video has emerged online showing how a Nigerian grandmother became an instant internet sensation with her “legwork” moves while dancing with her grandson.

In the video that has gone viral on social media, the elderly woman could be seen showing off her astounding dancing skills as her son cheered her on.

This video in some way supports how very powerful pop culture is and the manner it has influenced so many parts of human daily lives.