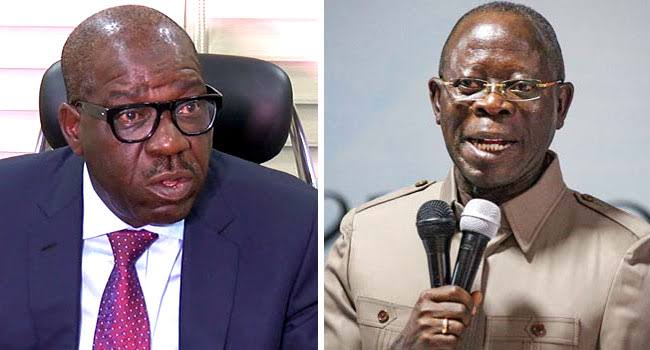 Oshiomhole Says Obaseki Is A Snake, Vows To Return Edo To APC For Sustainable Development

A former national chairman of the ruling All Progressives Congress (APC), Adams Oshiomhole has likened the personality of the incumbent governor of Edo State, Godwin Obaseki, to “snake that entered our family home”.

KanyiDaily recalls that Governor Obaseki resigned his membership of the ruling APC after he was declared ineligible to contest at the party’s just concluded governorship primary, by the APC screening panel in Abuja.

Oshiomhole while addressing his supporters in Edo during the weekend, expressed confidence that the APC would win the September 19 governorship election.

The former APC chairman said he is glad that “God has taken out the snake”, adding that those who were bent on destroying the Edo State chapter of the party, have been “smoked out”.

Oshiomhole who he was ambushed by a huge crowd of supporters while on his way to his Iyamho village from Benin City, said:

“I wanted to come in at night, so that I can quietly go home and then tomorrow (Monday) we can meet.

“But I am very pleasantly surprised that these thousands of people would wait till this night. I wanted come home quietly, but the very vigilant, ever rugged and respected and resourceful people have waited behind.

“Now God has driven the snake that entered our family home to where he belongs. A few weeks earlier, the snake said APC was his house and that he was not leaving, but less than 72 hours after saying this, he left.

“I begged those who were being persecuted to take it easy, that they shouldn’t burn the house we all laboured to build because we want to smoke out the snake. Now, the snake has been smoked out of the house.

“If we had burnt the house because the snake was giving us a problem, we will all have been homeless by now”.

“I have come home to join you and start the process of reclaiming the house back to the family of APC. What gives me joy is that, as they say, he with God is majority and if the people say yes and God says yes there is no man born of a woman that can say no.

“When I became governor of this state, I was not the chairman of anything. I have left the presidency of the NLC.

“Now I have only one mission and I am sure it is our common mission; our common vision to bring Edo back to the part of sustainable development.

“I have come home for only one project. I am not going back to Abuja until the project is completed. I came back home not to rest, but to work. We want to return to the government of the people by the people and for the people.”

KanyiDaily had reported that Governor Obaseki crossed over to the Peoples Democratic Party (PDP) after the opposition party granted him waiver to contest its primary and he won the party’s ticket. He will now face Osagie Ize-Iyamu of the APC in the September election.