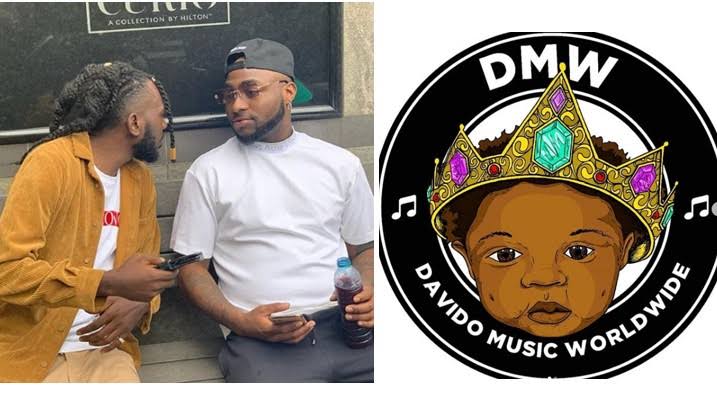 Davido’s owned DMW music label is a prestigious one and is also dubbed the 30 Billion Gang. The name DMW came into existence after Davido officially announced his break from HKN Music.

Boasting of talents like Davido himself, Peruzzi, Mayorkun, and Dremo to mention but a few, the label was launched in 2016 and is arguably one of Nigeria’s most thriving music labels.

May D, who was previously signed to Square Records, and was recently in the news after he accused Paul and Peter Okoye of now-defunct Psquare music group, of not fully taking care of him as an artiste under their label.

The singer has now shared a good news via his Instagram page this morning, that he has been signed to DMW. He wrote: ‘My New Family, I’m So Excited ! PROBLEM #DMW #30BG #CONFAMENT .

Positive reactions and praises are being heaped on Davido following the announcement that May D has signed with DMW. Below are some reactions to the news:

Davido on course to put May D on the Map again.

Davido takes care of everyone and everything… His family, his gang… Even his fans?❤️ man just brot May D to DMW..

IF I WASN’T STANNING DAVIDO I WOULD HAVE BEEN WASTING MY “STANSHIP” ??#davido #30BG

He just signed May D into 30BG!

Mr May D just got signed to DMW ???
I stan, restan, alway going to stan Davido
A KING❤️??

I might be pro Wizkid FC, but doesn’t stop me from recognizing what davido does and celebrating him

Dude has an amazing heart, especially for someone that grew up with all that privilege.

Bless him for giving Mr May D another chance at stardom. ??

Davido is that one friend that everyone needs in their life ?
When Sauce kid got out of jail, Davido was there for him
When Cynthia Morgan had no one to turn to, Davido reached out to her
When May D thought all hope was lost, Davido welcomed him to DMW
God I love this man ?❤ pic.twitter.com/6eIQmSZO3m

If you remember, Davido signed Sauce Kid after he got released from Jail to revive his career, he did same thing for Dammy Krane, Now May D.

Take it or Take it, that guy is a blessing to Naija Music Industry ?? pic.twitter.com/HhhiMVNX24

Davido is offline and he keeps lifting people, at least you can’t call this one clout

The same people who laughed at May D few months ago, are the same people congratulating him today. Keep working and Pray for Grace. pic.twitter.com/sY2Ki7nwHG

Davido asked Cynthia Morgan to call but she no get airtime, May D borrow Airtime from MTN call Davido now he’s in 30BG

You see in this Life the Lion in you will only come out if the Parm Kernel breaks the dishonesty of the tortoise while saturating the atmosphere.

Davido has done it again. He signed May D to the strongest record label right now in Nigeria, DMW.

Retweet if Davido is your GOAT ?

May D is a bundle of talent but signing an artiste who’s been off the scene for a while is a huge risk.

Davido said we rise by lifting others and he’s been doing that ever since. May D now in 30BG family and we can’t wait for bangers. ?

May D and Davido bromance go way back, obo once said when asked in an interview that May D is one of his best friends ❤
Also remember the lyrics of their song BLESS ME “forward ever backward never, May D and Davido together” ?? pic.twitter.com/mV3l6ONQOC

Someone legit said Davido’s Nice guy don too much because he signed Mr May D. Mehn I’m tired of y’all

KanyiDaily recalls that weeks back, Davido took a break from social media and announced that he would be returning to social media after the release of his third album, ‘A Better Time,’ this July.