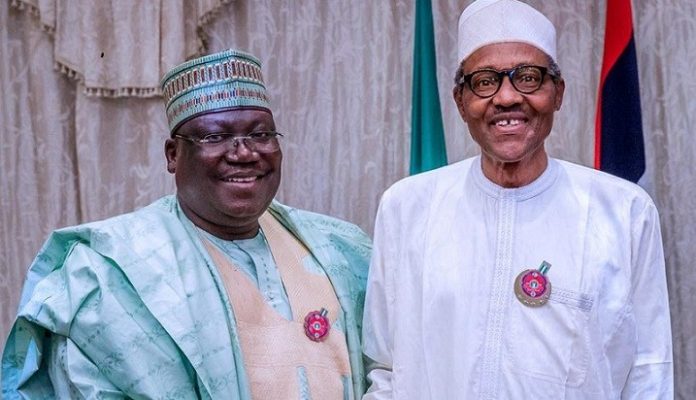 The conspiracy that ousted APC ex-national chairman Adams Oshiomhole and propped up Yobe Gov Mai Mala Buni as chairman of the party’s caretaker committee has a focus: to put forward Senate President Ahmed Lawan for the 2023 presidency.

An exclusive report by Sahara Reporters revealed that Lawan is eyeing the government top job as he hopes the APC will throw open the contest for the party’s primary.

“Lawan is making moves for presidency in 2023 and this may be his first ambition in that direction,” Sahara Reporters quoted a source as saying.

“He is a proponent of the north-east producing the next president and that is his agenda if the zoning favours the region.”

The northeast is jostling vigorously for the opportunity to also bid for power after the eight-year tenure of Preident Muhammadu Buhari from the northwest.

If the Yobe senator truly has such ambition, he is upsetting the alleged plan of his ally and party’s national leader Bola Tinubu to contest in 2023.

Tinubu in 2016 stoutly rooted for Lawan to clinch the Senate presidency. The party leadership, too. But Sen. Bukola Saraki outfoxed them all. Again in 2019, the former Lagos governor didn’t flagellate in his support for Lawan to become No. 3 citizen.

All of Tinubu’s support couldn’t have been for nothing, considering his experience and finesse as a political juggernaut.

Should the APC make the contest a free-for-all in the run-up to the 2023 presidential election, Lawan and his backer will get in the ring with others to make a play for the ticket.

The office of the Senate president has denied the news as speculations.

There more related speculations when Oshiomhole, aided into office by Tinubu, held sway as chairman.

He was believed to have been stationed at the party’s headquarters to swing the APC ticket for Tinubu.