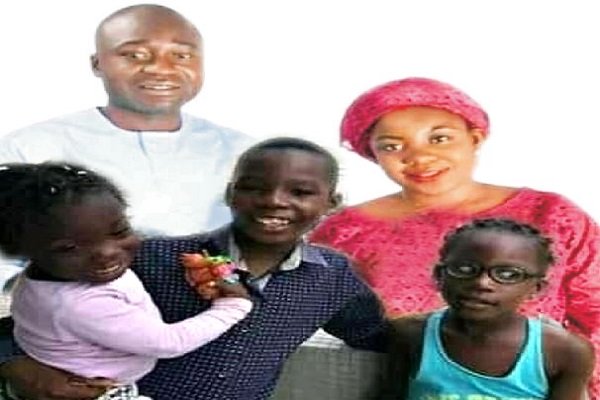 The man lost his family

It has been nine odd months since Tarveshima Jebe lost his entire family of a wife and three children in an auto crash, but he is still far from getting over the disaster.

Tragedy had befallen the indigene of Tse Jebe in Mbagba, Mbahine, Ushongo Local Government Area, Benue State on September 14, 2019 when a vehicle his 32-year-old wife, Comfort, and children (David,10; Beauty, 7 and Favour, 2) were traveling in from Abuja to Makurdi crashed on Eggon-Lafia Road.

Since then, he has been grappling with an experience his fragile posture can hardly bear. Every new day, his mind is crowded with thoughts of his lost loved ones who were committed to mother earth on September 18 last year.

“For seven months after their burial in September last year, I could not sleep even for a minute,” he said as he recalled the good times he had with his wife and children before tragedy struck.

“I met my wife before she entered secondary school in Gboko and we started a relationship right then.

“She eventually completed her secondary school as my wife before she went to higher institution. So we have come a long way.

“I raise this woman myself and I never thought she could die before me.

“I was already laying the foundation for her to take care of my children even if I’m not there.

“She was so submissive to me, and they lived in Makurdi with my mother while I stayed in Abuja.

“A few months before their death, I travelled to Benin Republic on official duty.

“When I came back, the holyday was long, so I decided that they should come over to Abuja and spend their vacation with me.

“While in Abuja, we were going to Kaduna on a daily basis, enjoying ourselves on the train as one united family.

“We bought a lot of things in the process because I wanted them to enjoy life. I didn’t know we were having our last fun together.

“God took them away from me.”

He said that taking another wife is out of the question, because he does not fancy a situation where the new woman would provoke him and he would be reminded of his late wife.

Asked how she learnt about the accident, he said: “I had missed her call after they departed Abuja. I tried to return the call, but her number was not going through.

“I became restless because something kept telling me that my family was in danger and that I needed to look for them.

“I phoned Benue Links Transport Company but they were not picking my calls. I called a friend in Lafia and he told me that an 18-seater bus belonging to Benue Links and travelling from Abuja to Makurdi was involved in a fatal accident and only one woman survived.

“When I arrived scene of the accident in Nasarawa Eggon, I found that my wife and two children had died. The third kid was alive but had sustained serious injuries and was in pains.

“I took her in my car with the help of my friend, and we drove to Makurdi.

“While we were on the road, I phoned one of my aunts who worked with the Benue State University Teaching Hospital to arrange for the treatment of my little daughter who survived the accident.

“Unknown to me, she had just retired from the hospital. But she assured me that the hospital was working

“On getting to the hospital, we discovered that the gates were locked and we were told that doctors were on strike.

“I rushed to the Federal Medical Centre Makurdi but it was the same story.

“As I turned back to head to Madona, a private hospital, my daughter gave up the ghost.

“I still can’t believe the pain of this whole loss. My heart is broken. I cannot believe that I will never see my wife and kids again. I literally can’t bear it.”

‘What my wife, kids tell me in dreams’

Jebe says his loss is compounded by the trauma of having to host his deceased wife and children in dreams almost on a daily basis.

He said: “I keep seeing my wife and children in the four corners of my room. My wife keeps telling me that I need to save accident victims; that I should not allow people to die the way she and her children died.

“If someone had rushed them to the hospital, they would not have died. But they delayed until they bled to death. Hence I should make sure that accident victims are rescued immediately

“My son also keeps telling me in my dreams: ‘Daddy, you are a widower. Why don’t you reach out to widows and the less privileged?’”

Jebe said he narrated the dreams to his pastor, who told him that God wants him to be a humanitarian; to reach out to people who need help, especially accident victims.

This, he said, informed his decision to set up Comfort Ngumimi Jebe Foundation in honour of his late family members.

He said: “I started sleeping since I started the foundation, which takes care of widows and the less privileged. Thoughts of their death started going off my mind.

“When I told my pastor that I had started sleeping, he said that is what the Lord wanted me to do for the rest of my life.

“I find joy when I visit orphanages.

“Another thing that keeps me alive is the ove and care I have for my wife and children. So, when I started thinking about their death, the sweet memories we had together overshadowed my plight and I see them smiling. So l live on imagination.”

He call on well-meaning Nigerians to support his foundation in order to help accident victims, so that they would not die the way his wife and children died.