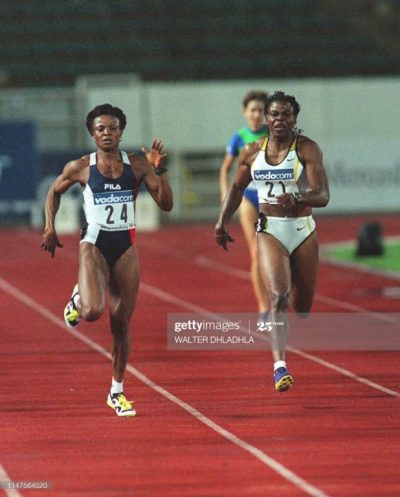 Ogunkoya: How Charity Opara and I Dominated The World In 1998!

Reigning African 400m record holder, Falilat Ogunkoya says the 1998 athletics season will remain as indelible in her memory as her two Olympic medals in 1996 in Atlanta.

Ogunkoya was ranked the best quartermiler in the world in 1998 following her string of impressive performances which included
winning the Goodwill Games and IAAF World Cup (now Continental Cup) titles as well as the Grand Prix final.

She also recorded some incredible performances in the 200m,running inside 22.30 twice. First was at the African Championships in Dakar, Senegal where she successfully completed a 400m/200m double in an incredible 22.22 seconds personal best,then the third fastest time by an African woman over the distance.

She proved the performance in Dakar was not by happenstance by breaking 22.30 again,this time in Johannesburg,South Africa at the Athletics World Cup. She ran 22.25 seconds to place second behind the great Marion Jones.

It was however gloom at the beginning of the season for the African record holder after playing second fiddle to compatriot, Charity Opara in their early encounters. But Ogunkoya says what made the year very memorable was her rivalry with Opara.

“We made the whole world to focus on just the two of us in the women’s 400m. Charity was in great form and had a 5-0 lead in our first five meetings together. I remember she ran an altitudes aided 49.87 in Johannesburg and I came a distant second in 50.27,” Ogunkoya recounted and revealed the glimmer of hope she had with her performance in their next encounter in Oslo early

July was quickly dashed less than a week later in Rome.

“I lost to Charity by the narrowest of margins in Oslo (50.13 to 50.15) and thought I was getting back to shape but when she scorched to a new 49.29 seconds personal best at the Golden Gala in Rome, I was scared my African record would be gone that year if I didn’t get into shape. I was third in that race that night in 49.89 seconds. It was my first run inside 50 seconds that year but Charity’s performance got me really worried.

She was 3-0 up at this stage but my worry and that of my coach,Tony (Osheku) was that we could lose the African record of 49.10 seconds that got me a bronze medal at the Olympics in 1996. My coach even said if she breaks the record,we would go back to our base in Albuquerque, New Mexico, USA to train harder. It was that scary,” she said.

”Then followed the Herculis Zepter in Monaco and the Weltklasse in Zurich. In the former, Charity won, breaking 50 seconds for the fourth time that season while I came second, running 50.09 seconds.

”The Weltklasse in Zurich was particularly painful as I came in fourth with Charity second behind German girl, Grit Breuer.

”I had a good first half of the race but somehow managed to bungle it. My coach was furious. On the strength of my performance that evening, I started contemplating whether to go to the African Championships (actually ran 50.15 while Opara ran 49.59 seconds for second place).

”That same evening, my training partner, Seun Ogunkoya stole the limelight with his 9.96
seconds performance in the men’s 100m. What made his performance the highlight of the meeting was the fact that he outran reigning double Olympics silver medallist, Frankie Fredericks.

”The fiasco in Zurich punched a big hole in the new found confidence I had after breaking 50 seconds for the second and third time respectively in New York to win the Goodwill Games gold (49.89) and at the JJK Grand Prix meeting in St Louis, USA, winning in 49.87 seconds, my personal season’s best at that stage.

”Then the tables got turned!.

”It began at Africa’s biggest track and field stage, the African Championships in Dakar. Somehow we didn’t meet at the Nigerian trials in Lagos so the stage was set for a titanic battle at Africa’s flagship event in Africa. 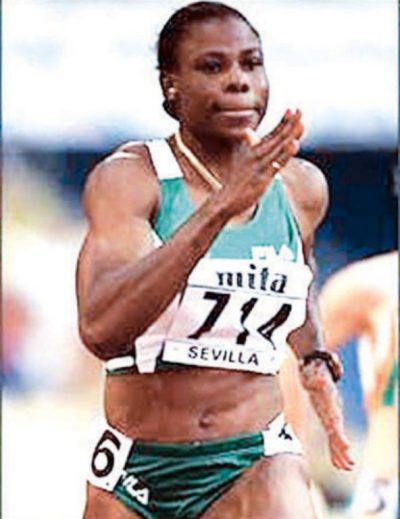 ”In Dakar, Charity was the favourite to win. She was on top of the world ranking at that stage with some quality performances including the 49.29 seconds she ran in Rome which was the second fastest in the African all-time list at the time. I was however unshaken in my resolve to end her dominance over me!

”In the final, I raced home first in 50.07 seconds with Charity second in 50.13. Wow, I was on top of the world not because it was my second African Championships 400m gold after the win in 1989 in Lagos, but because I was emotionally lifted and I didn’t look back from there, winning the 200m in a new 22.22 seconds personal best. I won our next four encounters in Lausanne, Brussels, Berlin and Moscow at the Grand Prix final before running an altitudes aided 49.52 seconds to win the World Cup in Johannesburg. It was a remarkable turnaround for me and a glorious show by Charity and I that got us ranked 1, 2 in the world. That was the first and so far only time Nigerians would dominate an event in the circuit.

”That year the Golden League made its debut. It was an annual international track and field meeting series which metamorphosed into the Diamond League in 2010. There were seven races in the circuit under the Golden League label and it included the Grand Prix final in Moscow, Russia. Charity won the first three in Oslo, Rome and Monaco. German girl, Grit Breuer won in Zurich while I won the final three in Brussels, Berlin and Moscow.

”The tension in Moscow was palpable as it was the only opportunity left for me to at least make it 5-5 while for Charity, it was a chance to bounce back and end our head-to-head record 6-4. We didn’t speak to each other before and after the race. We were both aware of what was at stake. It was also the major headline at the event. I ran 49.73 to win with Charity second in 50.09 seconds. We were really on top of the world that year.

”That same year Glory Alozie was also on fire in the 100m hurdles, winning I think 15 of her 17 races. She only lost at the Grand Prix final to Michelle Freeman of Jamaica. She won the 100m hurdles at the World Cup in South Africa. 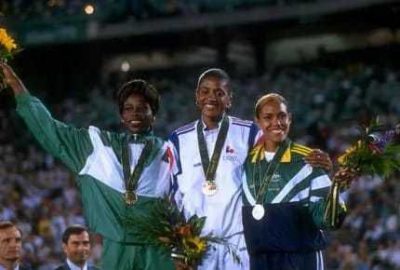 Seun Ogunkoya was also flying Nigeria’s flag very high in the 100m, beating Frederick’s twice, first in Zurich and at the African Championships. He was a silver medallist at the World Cup in Johannesburg. A couple of other Nigerians also did very well. Sunday Emmanuel (now late) ran a good race (20.45) to win the 200m silver behind Fredericks while Clement Chukwu scorched to a 44.65 seconds personal best to win the men’s 400m title in Dakar ,” recounted Ogunkoya with some excitement in her countenance.

That soon changed to despair and sadness especially with what has happened to her event, the 400m in particular and track and field in general in Nigeria.

“We are no longer forces to reckon with in the women’s 400m in Africa not to talk about the world we once dominated. It is so, so sad,’ Ogunkoya lamented.

“This is an event we dominated in Africa between 1985 and 1998, winning seven of the eight titles on offer. But what happened after my victory in 1998? We have been able to win it only once and that came in 2014 courtesy Folasade Abugan. We won only once in 10 attempts!’

Ogunkoya is however optimistic that the future is bright for the sport that brought Nigeria her only individual gold medal at the Olympics and 13 out of the 25 medals including two of the three gold medals Team Nigeria won at the quadrennial games.

“With a good federation and the backing of Mr Sunday Dare, the Honourable Minister who has brought fresh hope into sports administration in Nigeria, we can be hopeful again,” she said and wants quality men and women to get into the board of AFN.

“That is a no brainer. We need men and women with impeccable record in track and field, with international exposures and connections to get into the board. Experienced coaches with proven track record of performance and international exposure and connection should be employed or made to head the technical department of the AFN. Let’s get the departments in the federation up and doing, have a certification system for our coaches and have a sound and smart marketing department. If we can get these in place,track and field in Nigeria will record better memorable moments than we achieved in Atlanta in 1996 or in the international circuit in 1998.”