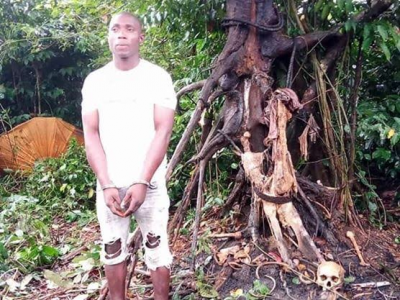 One of the suspects, with the decomposing body of the victim hung on a tree –> 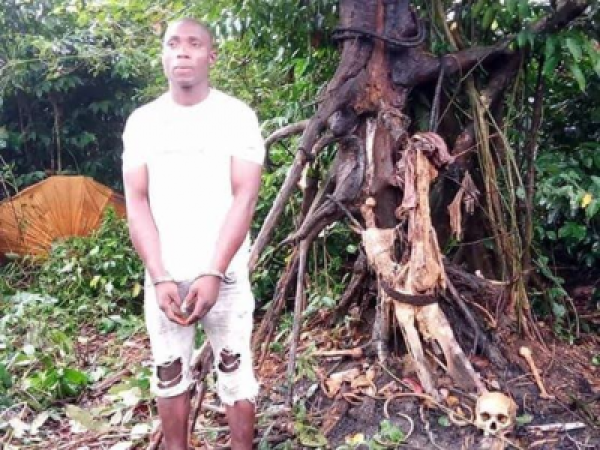 One of the suspects, with the decomposing body of the victim hung on a tree

Detectives attached to the Anti-kidnapping Unit of the Rivers State Police Command, following a tip-off on the kidnap of one Dinabari Ereba, have arrested two suspected kidnappers, Osundu Uchendu and Amebulem Amos.

The apprehended duo were among the five-man gang who kidnapped and killed Ereba in a forest at Alesa farm road in Eleme Local Government Area of Rivers State after collecting ransom from the family.

The victim, the late Ereba, 38 was kidnapped on the 15th of May, 2020 at Woji in Obio Akpor Local Government Area of the state.

A team of Police Officers led by the Assistant Commissioner of Police, Operation, ACP Innocent Umerie, took journalists to the scene where the victim was killed and tied to a tree.

Omoni said efforts were on to arrest the fleeing members of the gang, while investigation was ongoing.

One of the suspects, Osundu Uchendu, 25, who confessed to the crime said he joined the gang as a result of hardship.

Uchendu, who hail from Emohua Local Government Area said he received N30,000 thirty from the ransom.

The suspects confessed to have carried out other operations around Woji, Abuloma, Peter Odili Road and Eleme Communities. The suspects were arrested while trying to change the colour of the stolen deceased’s vehicle.

Meanwhile, the elder brother to the deceased, George Deekor, said his younger brother was coming from the hospital where the sister gave birth before he was kidnapped.

Deekor explained further that the kidnappers after collecting N1 million ransom from the family could not release him, only for the family to realize through Police investigation that he was gruesomely murdered and tied to a tree in a forest at Eleme.

Late Ereba was said to be a sachet water producer and distributor.

The Chairman, Philip Okparaji, expressed shock of the killing in a forest in Alesa, Eleme LGA by a kidnap gang.

Okparaji, while condemning the act warned hoodlums and criminals never to use Eleme land to perpetrate their heinous crime as the Council authority was out to smoke out all criminals from the area.

He condoled with the family of the deceased and commended Rivers State Police Command for living up to its responsibilities.

He stressed his administration’s preparedness to continue to collaborate with Security agencies to give the people of Eleme a new lease of life which has led to the recent establishment and equipping of Volunteer Vigilante group in the area to help give useful information to security agencies towards securing the LGA.