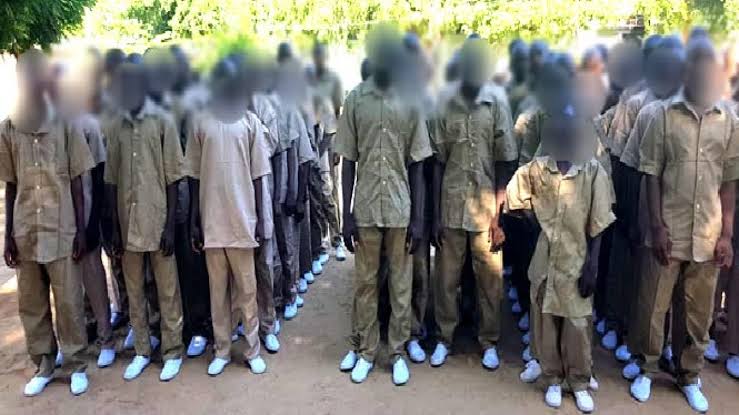 A total of 602 Boko Haram members have denounced their membership of the terrorist group and sworn oath of allegiance to the Federal Government of Nigeria.

The former insurgents, who have completed a de-radicalisation, rehabilitation and reintegration (DRR) programme, made the decision at the Malam Sidi Camp in Kwami local government area of Gombe state.

According to New Agency of Nigeria (NAN), they denounced thier membership and swore an oath of allegiance on Monday July 13, 2020, before an 11-man quasi judicial panel headed by Nehizena Afolabi, justice of the federal high court in Gombe.

Speaking during the exercise, coordinator, operation safe corridor, Bamidele Shafa said the appearance of the repentant insurgents before the judicial panel was a major requirement before their reintegration into the society.

“The panel is for the clients to appear before it to confess their pasts and denounce their membership of Boko Haram, Islamic State’s West Africa Province (ISWAP) as the case maybe, and swear oath of allegiance to be loyal, disciplined and obedient citizens of the Federal Republic of Nigeria and then make commitment,” he said.

“The commitment is that at the end of the programme, where they commit any offence, they stand to forfeit all privileges that they have acquired today and will be liable to offence against the state.”

According to Shafa, since the operationalisation of the DRR programme in 2016, it had admitted 893 clients into its camp while 280, including two Chadians, had been transferred to their various national and state authorities.

The Borno commissioner for women affairs and social development, Zuwaira Gambo added that there is a structure on ground in Borno to continue from where the DRR programme stopped, while those earlier released to the government had been properly integrated into society.

“We will provide them with psycho-social support, continue with religious admonition in order to make them good citizens of the country,” she said.

“We will also give them starter packs to help them practise the skills that had been acquired in the camp here.”

One of the repentant insurgents now makes N250,000 from barbing on monthly basis and has employed several others, Gambo noted.

Jasper Ukachukwu, senior programme Officer, Centre for Democracy and Development (CDD), maintained that setting up the panel was to ensure some level of accountability in the DRR programme, so that even when the insurgents leave the camp, “they will also be held accountable for any offence they may commit.”

“When you are in the group and you are tired and want to come out of the bush, you need to see what is happening to others; so the DRR programme is sending the right message,” he said. (NAN)

KanyiDaily recalls that the Nigerian Senate had introduced a bill seeking to establish an agency for repentant Boko Haram insurgents after their massive killings and wanton destruction of property especially in the North East geo-political zone of the country.

The Bill is aimed at providing avenue for rehabilitating, de-radicalizing, educating and reintegrating the defectors, repentant and detained members of the insurgent group Boko Haram to make the useful members of the society.