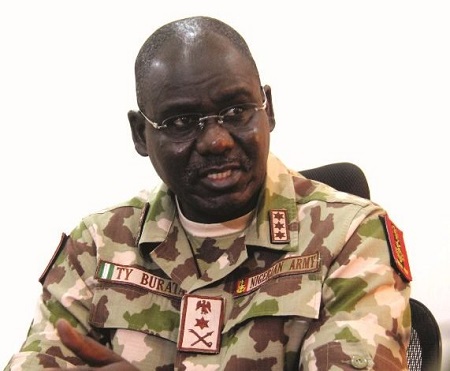 Fresh pressure on Buhari to fire Buratai, others over uncontrollable bloodshed in north

President Muhammadu Buhari has continued to come under increasing pressures to fire the service chiefs heading the Nigerian Armed Forces, essentially, the Chief of Army Staff, Lt. Gen. Tukur Buratai, as bloodshed of innocent citizens continued to be perpetuated by bandits in the northwest Nigeria unabated even with the presence of the Nigerian Army, the Police and other security operatives. Presidency sources disclosed that Buhari may just be waiting for technical advise from the principal officers to effect a change of the leadership of the Armed Forces who could inject new ideas and technicalities into the security system to combat the bandits as well as the Boko Haram terrorists in the northeast.

It is becoming the case that each time the military celebrates marginal success in the fight against the terrorists or bandits, the societal outcasts respond within hours to announce their growing strength in the violence merchandise.

Gunmen suspected to be Fulani herdsmen had at the weekend invaded three communities in Zango Kataf Local Government Area in Kaduna State, killing over 24 people, injuring several other indigenes in the violent operations.

It was gathered that Chairman of Zango Kataf Local Government Area, Elias Manza, narrated that gunmen suspected to be Fulani militia, struck in Chibob village on Friday night, killing nine people, leaving several others sustaining various degrees of injuries and burning many houses.

The Council Chairman was said to have further narrated that the Fulani militia also invaded Sabon Kaura village with their sophisticated weapons; 15 persons were said to be slaughtered in the night operation. The militia further struck in Ungwan Audu village on Sunday night, killing people, burning houses and farmlands. It was a weekend of bloodbath and arson in Kaduna State.

The Local Government Chairman was said to have decried that many families and homes were disorganized as indigenes fled for safety during the attacks. Those who survived the attacks, but sustained injuries were said to be taken to different hospitals in Kafanchan and Zonkwa for treatment.

There has been tension between indigenous farmers and Fulani herdsmen in Zango Kataf over farmlands. The Kaduna State Government had imposed curfew in some parts of the troubled zone.

The attacks took place while troops of the Operation Whirl Stroke were celebrating the killing two bandits and injury on several others in a makeshift camp at the outskirt of Arufu in Taraba State.

The Coordinator of Defence Media Operations, Major General John Enenche, had confirmed the military breakthrough in a statement on Saturday.

Enenche had narrated that the operation  was a response to “actionable Human Intelligence on the infiltration of armed herdsmen on 10 July 2020 at Chambe community in Logo LGA of Benue State where two villagers were killed.”

He said that the troops from Tomatar and Gov/Afia swiftly were deployed to the scene but the bandits have fled the area. He added that the troops trailed the armed bandits to neighbouring Taraba and on sighting them, the bandits launched an attack on the soldiers, saying, but the soldiers “overwhelmed the criminals with high-intensity fire, killing two of them while others fled in disarray with gunshots wounds.”

The troops were said to have recovered one AK-47 rifle and 10 rounds of 7.62mm Special from the criminals in the operation.

However, the bandits fought back on image recovery at the weekend to erase the success records of the military.