Onlookers have been left stunned after seeing a 2003 Toyota Camry with Lamborghini doors. The doors of the Camry open by moving outward and then rotating 90 degrees at the doors’ hinge.

The truth is that you can only see such spectacle in cars like Lamborghinis or with cars with Dihedral doors like Koenigsegg.

According to AutoJosh, a sneakers collector, Ikemesit “BadBlood” Nkereuwem-Tim, was responsible for availing some Lagosians the rare opportunity to see a car with scissors doors.

This happened when he visited the Ikeja City Mall. 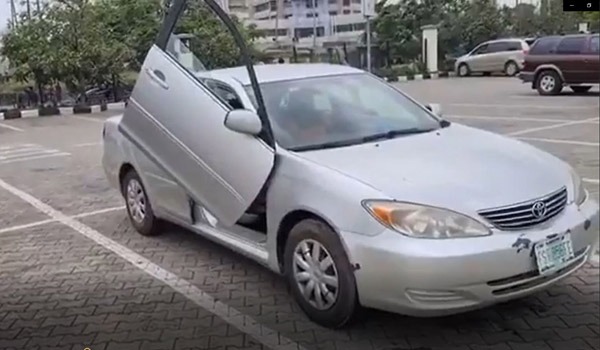 “BadBlood” – who is the  2017 Supersports bike racer vice-champion – fascinated some who had gathered with his car’s scissors doors.

Interestingly, the scissor door was not on a Lamborghini or a Koenigsegg.

Instead, it was on a 2003 Toyota Camry. The Camry had been modified to have a scissors door.