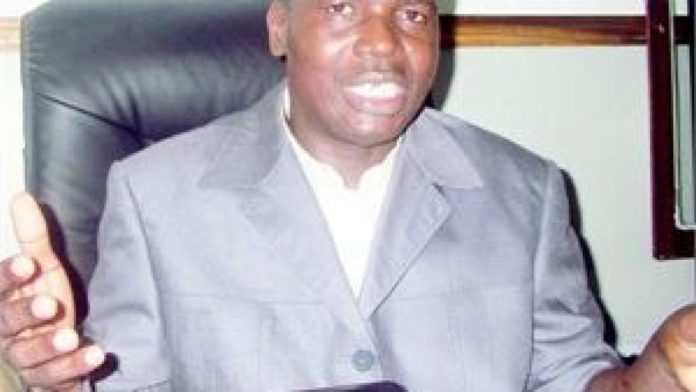 In the spiritual realm, I saw Nigeria divided into 3 – Bishop Udeh

The General Overseer of Mount Zion Faith Liberation Ministries (a.k.a By Fire by fire), Nnewi, Anambra state, Bishop Abraham Chris Udeh has called for what he termed a round-table conference to discuss the best way to divide Nigeria and how many countries Nigeria will be divided into.

He said as for himself, he had already seen in a spiritual realm where Nigeria was divided into three countries, namely North East/North West, North Central/South West and South East/South South, adding that after seeing the countries, he heard a laud voice warning that failure to divide Nigeria, a serious war will break out from the norther part of the Nigeria.

Bishop Udeh who spoke at his Cathedral, Nnewi, shortly after his 21-day fasting and prayer session, contended that God is not happy with Nigerian politicians because of their corrupt tendencies and rigging patterns.

According to the cleric, “I warned politicians not to rig the 2019 general elections or else God will visit such rigger or riggers with fire, thunder and fury and because they defiled my warnings and went ahead to rig the elections, God has visited them with COVID-19 fire as number one plague to be followed up soon with thunder and fury, unless they repent”.

“I also saw gunfire at Aso Rock and if they don’t repent, the gunfire will manifest in the physical realm. The North has not seen war before and that is why any small thing, they will talk about war. A certain ethnic group that has been ruling Nigeria since 1976 succeeded in ruining this country because they are holding tenaciously to power which they cannot control. So, the best is to divide Nigeria now, possibly this year or else the looming war will escalate. These are the things I saw in the spiritual realm”.

He queried; “How can those who are not articulate and who don’t have acumen be ruling Nigeria over the years? I am seeing the Nigerian leaders sitting on a hot and shaky seats and I suggest they should resign as I have been calling since 2016 because the more they keep occupying the seats of power, the more the country is sinking deeper”.

“However, I an seeing something good in Prof Ibrahim Gambari, the new Chief of Staff to the Presidency, even though he can’t make magic or change the damning situation of the country. Therefore, the best for the one occupying the presidential seat is to throw in the towel now and vacate the seat to avoid escalation and bringing in more catastrophe to the country”.

“I advise that African mentality should seize to be in Nigeria. The only way to appease the wrath of God is for this administration to hand over power to the duly elected or give it to someone else who is qualified to bring back Nigeria’s lost glory but my general view is to divide Nigeria into three countries as I had earlier suggested and if we divide peacefully, any side that is not measuring up will be assisted by the other two since it was a peaceful division”.

“The need to divide this country cannot be over emphasized because an adage says that ‘light and darkness’ cannot stay together”.