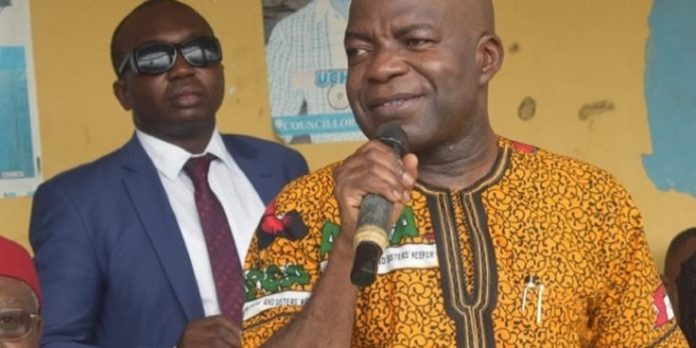 The All Progressive Grand Alliance, (APGA), Abia State chapter, has said that its governorship candidate in the 2015 and 2019 governorship election, Dr. Alex Otti, is still bitter with the party after losing the two elections as well as his bid to become the national chairman of APGA.

The party also stated that it is not worried by the news making the rounds that Otti has joined the All Progressive Congress, APC, as he was suspended from APGA on July 15, 2019.

Briefing newsmen in Umuahia, factional chairman of the party in the State, Rev. Augustine Ehiemere, alleged that after failing to actualize his ambition, Otti resorted to sponsoring crisis to divide the party and falsely accusing the chairman, APGA Board of Trustees of Trustees, Gov. Willie Obiano and the party’s national chairman, Chief Victor Oye.

He, however, insisted that there is no crisis in the party, stressing that APGA in the state has been a vibrant platform to win elections before the former governorship candidate joined.

In his words; “For the purposes of record and clarity, there has never been any crisis in APGA, except the self induced crisis that was sponsored by Alex Otti in 2016 where he sponsored several dissidents in the party to cause crisis in APGA. It is on record that it was after he was frustrated in PDP that Alex Otti ran to APGA in 2014 where he was admitted, sheltered and nursed by the party as her governorship candidate in the 2015 election.

“The purported allegation of crisis in APGA is coming from a man who is the sponsor of the self induced crisis and his anger has always been that he did not succeed in dividing the party, both in the national and state.

“The last straw that broke the camel’s back was when he failed in his uncontrollable and selfish ambition to become the national chairman of the party after he was disgraced in the 2019 governorship election, an attempt which failed woefully. His bid to become the national chairman was his final bus stop and out of frustration and bitterness of heart, he chose to castigate the party and wrongly accuse the party leaders he ought to be grateful to.”