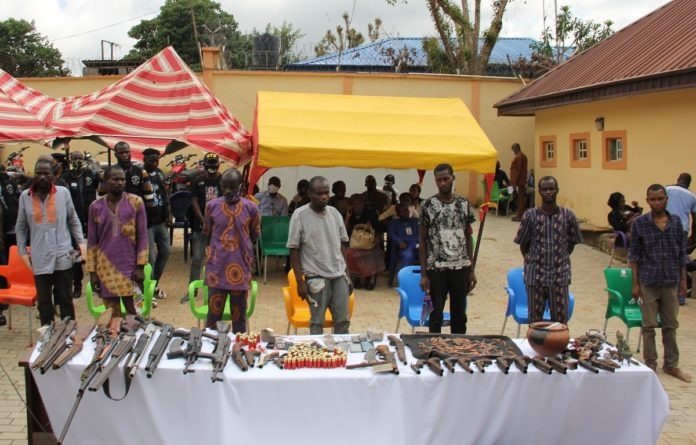 7 Arrested For Multiple Bank Robberies In Ile-Oluji, Oye Ekiti, Others

Police Operatives attached to the Special Tactical Squad have arrested a 7-man criminal gang that attacked and robbed three comm​ercial banks in the South-West States of Ondo and Ekiti between 2019 and 2020, killed innocent citizens including six (6) policemen and carted away several millions of naira.

Efforts are being intensified to arrest other members of the gang still at large and to recover other sophisticated weapons used in the operations.

In a similar vein, twenty-three (23) other suspects were also arrested by the Police operatives for their involvement in various crimes including armed robbery, kidnapping, illegal possession of prohibited firearms, car snatching at gun point, amongst other offences.

The following were recovered from the suspects: One (1) AK49 rifle, One (1) AK47 rifle, two (2) pump action guns, five (5) locally made guns, nineteen (19) locally made short guns, one hundred and twenty-five (125) cartridges, one hundred and forty-five (145) AK47 ammunition, locally fabricated  explosives and a Toyota Corolla vehicle with Reg. No. LSR 490 GC. The suspects will be charged to court on conclusion of investigations.