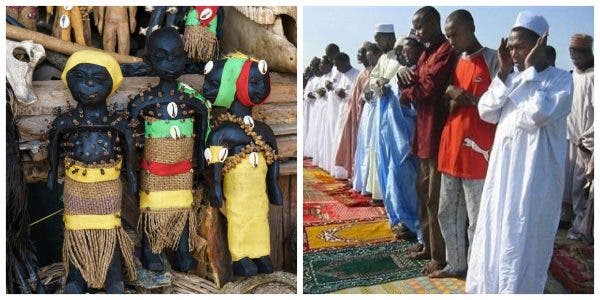 Some traditional worshipers and Islamic leaders in a community clashed on Tuesday over the ownership of the corpse of a man who committed suicide in the Sagamu area of Ogun state.

The deceased, Muhammed Jamiu, an electrician and father of one, reportedly killed himself in his room on Yakubu Habibu Street, Agura, Sabo, Sagamu, on Monday night.

Reports have it that although the deceased was a Muslim, some traditionalists attempted to take possession of his remains shortly after the news filtered out.

The traditionalists reportedly insisted that a ritual must be performed to avoid any repercussion of the death in the area.

The Imam of Aduragbemi Mosque in Agura Sabo, where the deceased prayed before his death, Nurain Ilyas, said his members were shocked by Jamiu’s death.

He noted that they became more worried when the traditional worshipers attempted to take over his corpse.

“His name is Muhammadu Jamiu. He was 32 years of age. He was an electrician. He was married with one kid, but divorced many years ago. He was an easygoing person. He used to pray in my mosque and I always admonished him to make his faith stronger. I think he hanged himself.

“The police came to inspect the scene after it happened on Monday night.”

Ilyas said no suicide note was found around the scene of the incident.

On the clash between the two religious groups, another Islamic leader, Imam Sonubi Dauda, said the matter was later taken to the palace of the traditional ruler in the area.