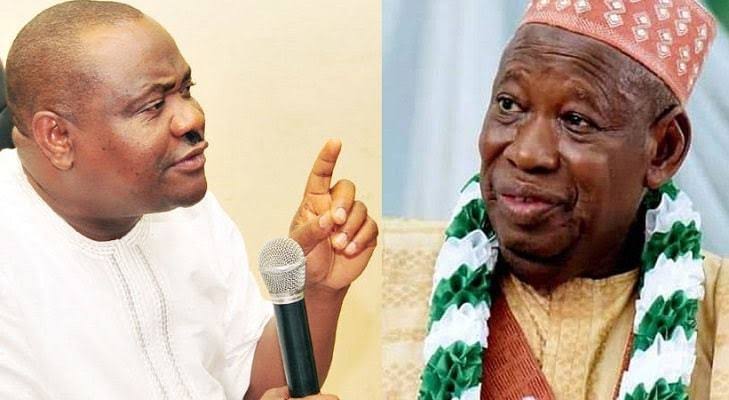 Edo Governorship Election: We Will Spend Ganduje’s Dollars Before Sending Him Into Coma – Wike

The Chairman of the Peoples Democratic Party (PDP) National Campaign Council for the Edo State governorship election, Governor Nyesom Wike has responded to a statement credited to his Kano State counterpart, Abdullahi Ganduje.

Ganduje, who is the Chairman of the All Progressive Congress (APC) National Campaign Council for September 19 governorship election in Edo, had said Wike would be isolated until the election was concluded.

During a media briefing in Abuja, on Monday, Governor Ganduje said:

“We know the PDP made Wike their (campaign council) chairman. I assure you; we will isolate Wike in an isolation centre and before he recovers, the election is over.”

Reacting in his address at the inauguration of the 93-member PDP campaign council in Abuja, Wike said he did not operate at the same level as Ganduje.

He described Ganduje’s remark as nothing but a subtle plot to use security agencies to rig the election in favour of the APC. Wike said:

“Nobody can intimidate us in this election. Yesterday (Monday), I was told and today I read on the pages of newspapers that Governor (Abdullahi) Ganduje said that he was going to isolate me until the election is over.

“If Nigeria were to be a country, who is supposed to be isolated? A man who pocketed dollars in a babariga from contractors is not isolated and you say that I should be isolated? In this country, where are we heading to? Let me tell you why they made Ganduje the chairman of the campaign council. It is because of the dollars they saw.

“But for dollars, Ganduje could not have been made the chairman of the campaign council. But what he doesn’t understand is that we from the Niger Delta, we shall ‘chop’ his dollars and we will ‘chop’ him into a coma. So Ganduje, your dollars will not work in Edo State.

“We have integrity in our party. But let us understand the statement made by Ganduje, don’t look at it ordinarily. What Ganduje said was that they have concluded with security agencies to make sure that the people of Edo State do not protect and defend their votes; that they will not allow them to come out and before you know it, they will announce the result. So he just said they will isolate me. No, I am not at his level.”

KanyiDaily recalls that Governor Ganduje made headlines last year after he was seen in series of videos receiving bribes from contractors handling projects in Kano state.