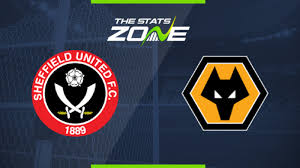 Wolverhampton Wanderers visit Sheffield United on Wednesday night looking to hit back from a potentially-crucial defeat to Arsenal, a result which has left the club battling to keep hold of sixth position.

After their 1-1 draw at Burnley on Sunday afternoon, United sit four points adrift of Wolves with five matches remaining.

Heading into their clash with Arsenal at the weekend, Wolves were being tipped as genuine contenders to qualify for next season’s Champions League having recorded three successive wins in the top flight.

However, a deserved 2-0 defeat at home to the Gunners has left Nuno Espirito Santo’s side looking over their shoulders as they bid to keep hold of sixth position, which would secure qualification for the Europa League group stages.

With the teams above them all winning over the weekend, that is the more realistic target for the West Midlands outfit, who must find a way to respond to producing one of their worst performances of the season.

The setback ended their eight-match unbeaten streak in the Premier League, while more attention will be paid to just five goals being scored in their last six matches in all competitions.

Nevertheless, Nuno will be confident that his players can raise their levels again for opponents who line up with a similar strategy and possess an equally hard-working mindset.

While Sheffield United have taken some time to find their rhythm since the resumption, four points from games against Tottenham Hotspur and Burnley have gotten the club back on track.

Although Champions League football is now arguably out of the equation, they know that victory at Bramall Lane on Wednesday evening will move them to within one point of their next opponents.

With some tough fixtures to come during the run-in, Chris Wilder will feel that picking up points against direct rivals is crucial if they are to make further headway up the standings.

However, three of the last four goals which they have conceded have come at the end of halves, something which will alert Wolves, who have made a habit of closing matches on the front foot.

After his ineffective performance against Arsenal, Adama Traore could drop down to the substitutes’ bench.

With Nuno likely to keep with a five-man midfield, the introduction of Diogo Jota may represent the sole alteration.

Sheffield United boss Wilder will almost certainly welcome back Jack O’Connell, who came through 35 minutes as a second-half replacement at Burnley.

With John Lundstram and John Fleck unavailable due to injury, Wilder must decide between Ben Osborn and Jack Rodwell for the final place in midfield.

Given what is at stake in a game between two teams who use the same defensive-minded strategy, everything points to this being a low-scoring affair. Although the home side will likely show the greater ambition, Wolves could do enough to earn a share of the spoils.