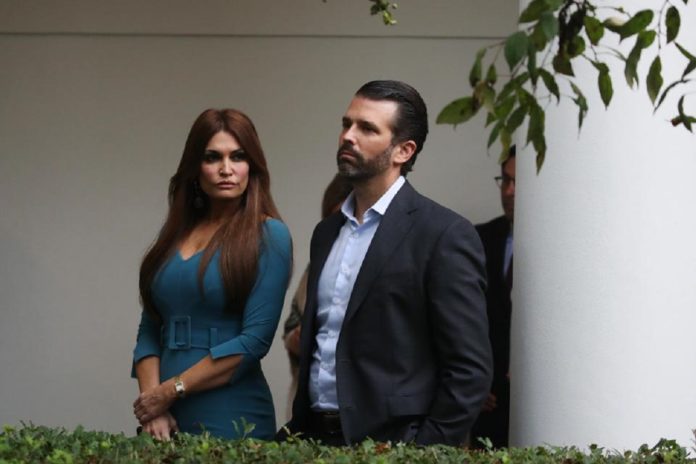 Kimberly Guilfoyle, who is dating the president’s eldest son, Donald Trump Jr., tested positive for the novel coronavirus while in South Dakota.

Neither has been in direct contact with the president and did not fly on Air Force One. She is asymptomatic.

“After testing positive, Kimberly was immediately isolated to limit any exposure. She’s doing well, and will be retested to ensure the diagnosis is correct since she’s asymptomatic, but as a precaution will cancel all upcoming events,” Sergio Gor, chief of staff for the Trump Victory Finance Committee, said in a statement. “Donald Trump Jr was tested negative, but as a precaution is also self isolating and is canceling all public events.”

Trump Jr., 42, and Guilfoyle, 51, will be driving home rather than getting on a flight, a source said.

Guilfoyle, a former Fox News host, serves as the national chair of Trump Victory Finance Committee 2020, the president’s reelection campaign, and is focused specifically on fundraising. She and Trump Jr. often headline fundraising events together.

The event the couple was expected to attend, a July Fourth celebration at Mount Rushmore, has been a long-planned goal of President Donald Trump. Friday’s fireworks celebration, expected to draw thousands, caps off a week during which the U.S. has set alarming new records of daily coronavirus cases — upwards of 50,000 a day — and public health experts have raised alarms that the crowds could produce a “super-spreader” event.

The large-scale event openly flouts Centers for Disease Control and Prevention recommendations to avoid spreading the coronavirus, with South Dakota Gov. Kristi Noem offering a blunt message to those concerned: There will be no social distancing.

“We told those folks that have concerns that they can stay home, but those who want to come and join us, we’ll be giving out free face masks, if they choose to wear one. But we won’t be social distancing. We’re asking them to come, be ready to celebrate, to enjoy the freedoms and the liberties that we have in this country,” Noem said in an interview with Fox News on Monday.

Guilfoyle and Trump started dating in 2018. She is the ex-wife of Democratic California Gov. Gavin Newsom.