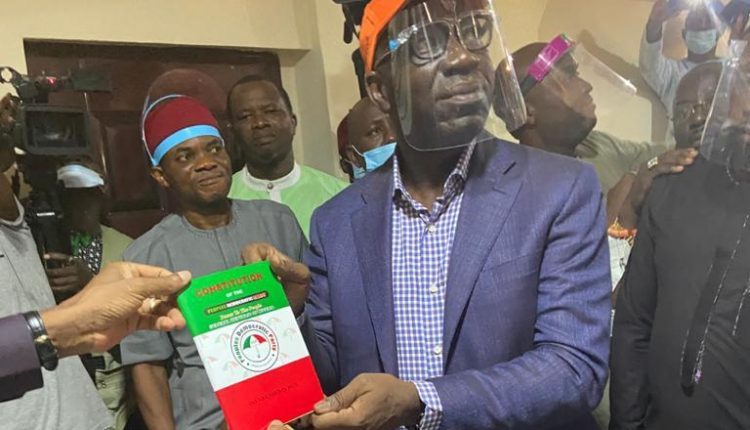 Obaseki: PDP Chief opens up on alleged sale of ticket for ₦8bn

A former State Publicity Secretary of the Peoples Democratic Party, PDP in Edo, Prince Francis Iyasere has dismissed as untrue, reports suggesting that the state governor, Mr Godwin Obaseki had to cough out N8 billion to secure the governorship ticket of the party.

Noting that the governor was frustrated out of the All Progressives Congress APC because of his alleged refusal to squander state resources, Iyasere wondered how and where the governor would suddenly get the said billions to have procured the PDP ticket.

While he explained that Gov. Obaseki got the ticket through a process of political horse trading by some fellow PDP governors in the country, he urged President Muhammadu Buhari to ensure a level playing field in the Edo election.

On the procurement of the PDP ticket, Iyasere said; “I do not understand. A man who could not give his party (APC) money, which warranted them chasing him around could now suddenly dole out ₦8 Billion? Sometimes, I feel people are day dreaming. As long as I am concerned, there was no exchange of money whatsoever.

“The PDP is coming from an angle of opposition for the past 13 years, so we  had to throw away our own ambitions and embrace the reality on ground.

“Even, when people like Hon. Omoregie Ogbiede-Ihama, who had been sponsoring the PDP for the past two years went to court, we supported him, but there was a round table conference which had in attendance, the South-South PDP governors and some friendly northern PDP governors and you cannot have these kind of persons coming to beg you and you will insist you want to go on”.