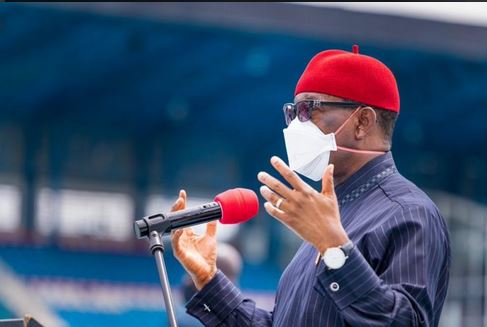 According to a report by Sun News, Governor Ifeanyi Okowa of Delta State, yesterday, said he was doing well with his wife, Edith, after both of them tested positive for COVID-19.

Okowa became the sixth governor to test positive for COVID-19. One of his daughters had tested positive last Friday, prompting him and his wife to embark on self-isolation.

With this development, the state, which recorded its index case on April 7, has 965 confirmed cases, making it the sixth worst hit state in the country.

Out of the 965 confirmed cases, 752 are active, 190 discharged from treatment centres and 23 deaths.

Governor Okowa, in social media post to make his positive status public, thanked Deltans for their prayers, saying, “we are well and continuing with our isolation and treatment.”

The governor, in a statement by his Chief Press Secretary, Mr. Olisa Ifeajika, assured that his administration would not relent in its efforts at combating the virus in the state.

He urged the public to support the government in that regard by complying with prescribed protocols by Nigeria Centre for Disease Control (NCDC).

Okowa reiterated that “COVID-19 is real. The rate is increasing in our state and the virus is taking the lives of some of our people.

“I, therefore, again call on every Deltan to observe protocols while in public to curb further spread of the virus, especially in the communities.”

In a related development, Osun Government confirmed, yesterday, that its Secretary to the State Government (SSG), Prince Wole Oyebamiji, has tested positive for Coronavirus.

Commissioner for Health,  Dr. Rafiu Isamotu, gave the confirmation in a press statement in Osogbo. He also confirmed the discovery of 10 additional cases.

He said one patient had been discharged after testing negative for the virus.

The commissioner lamented that one of the reasons for the sudden rise of cases in state was due to nonchalant attitude of citizens and residents to laid-down precautionary measures.

Isamotu also said  there were strong reasons to believe the state now has community transmission around Ilesa axis of the state.

He warned that unless citizens and residents improved in their attitude towards the pandemic regulations, government might be forced to impose another lockdown.

Pressure on Akeredolu to hand over to deputy

Meanwhile, Ondo Governor, Rotimi Akeredolu, is under pressure to hand over to his deputy, Agboola Ajayi, having gone on self-isolation as a result of his COVID 19 status.

The governor had on Tuesday announced that he tested positive though he was asymptomatic.

The governor, in a video released on the social media, said he would be operating from home in order for government activities not to suffer any setback.

However, some concerned stakeholders have advised that the best thing is to handover to his deputy to act for the next 14 days that he (Akeredolu) will be in self-isolation.

The governor had last year handed over to his deputy when he had serious health challenge that took him away from his duty post for weeks.

But the current face-off between them occasioned by their interest in the October governorship election may be responsible for the insistence of the governor not to hand over to his deputy.

Akeredolu, who is the chairman of the South West Governors Forum is in the APC seeking re-election, while his deputy is in the Peoples democratic Party (PDP) where he is also contesting the governorship race.

Over 250 have been empowered so far by the United Traders Association in Anambra State.

“We have so far empowered over 250members including widows since the lockdown and have also connected all market women in the south East geopolitical zone and assisted with Covid-19 palliative as a way to fight hunger and food scarcity during the pandemic.