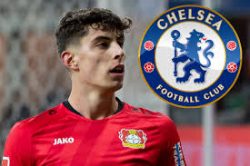 Chelsea manager Frank Lampard has not hidden his desires to build the West London club into a title contender.

The Blues who suffered a penalty of transfer ban last season have evidently turned their disappointment into a blessing with their progress so far in their post transfer-ban activities.

National Daily can confirm that Chelsea have previously completed a £38m signing of Hakim Ziyech from Ajax and have also secured a £52m capturing of Timo Werner from Borussia Dortmund in principle which is subject to medicals.

Interestingly, the Blues have expanded their appetite for a formidable squad with their interest in £75m rated Bayer Leverkusen sensation Kai Havertz.

These activities have undoubtedly excited Chelsea supporters who are anxious to see their great club challenge effectively for trophies.

National Daily further gathered that Chelsea have made statement with their ambition to secure Havertz by submitting their first bid for the Bayer Leverkusen star if the report emanating from WinSports can be trusted.

Frank Lampard and Chelsea have reportedly been in talks with the Bundesliga outfit and an initial offer has now apparently been made.

According to WinSports, Chelsea have offered the Bundesliga club £80million to take the 21-year-old to Stamford Bridge in their bid to tie the versatile midfielder down to a five-year contract worth £5m-a-year.