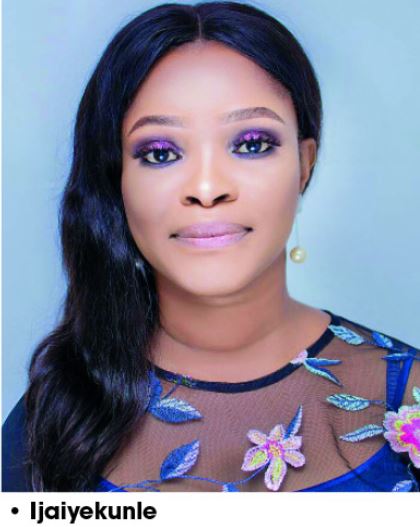 The Man Who R*ped Me Was My Neighbour And Trusted Family Friend – Activist, Ijaiyekunle Opens Up

Funke Elizabeth Ijaiyekunle, an ex-banker, is one of activists striving hard to wipe out the stigma of rape. She herself was raped at age 16 when she could not defend herself in the hand of a well trusted neighbour who she has known all her life.

Standing tall as a girl-child activist, a professionally growing coach and motivational speaker, Ijayekunle did not overcome her teenage experience, but became mentally equipped not to dwell on her past through determination, great zeal of focus as she gave herself into human developmental projects. She is a certified NLP, an emotional intelligence practitioner, who defends herself and hundreds of other young girls.

In this interview, Ijayekunle bares it all on the evil called rape and its related cases.

What is your Non-Governmental Organisation’s primary focus?

We are known as Heart Minders Societal Advancement Initiative (HSAI), a not-for-profit organisation that advocates against rape and other sexual misconducts. Our primary targets are women and girls. When we started out seven years ago, we found out that one in every three women has been beaten, coerced into sex or abused in some other ways. Most often by someone the victim knows, including husbands, fathers or other male family members. This was why we targeted that specific demographic to educate and sensitize them about rape and sexual abuses.

What happened on the sad-day? Did your abuser swing a surprise on you, or did you have any premonition?

My abuser was my neighbour, I had known him since childhood and he was a trusted family friend. It was not a surprise that he called on me to send me on an errand and I wouldn’t have suspected that such evil plan will ever happen. Like every rapist, he pre-planned the whole drama. He knew I would be at home alone at that particular time and he took the advantage. He called me and told me that a friend oweing him money has refused to see him and he needed me to just knock on his door and he would take it from there. That was how he pushed me into the room and his friend walked away. He then raped me after breaking a bottle and threatened to tear my cloth if I did not cooperate with him.

Did you speak out or report him to any member of the family?

I did not report to anyone because I was afraid and I know that my father will punish me or accuse me of following him willingly. That experience I never overcame instead became mentally equipped enough to not dwell on my past.

Do you have such conversation with your children today?

Yes, I do. I am still having the conversation with my children especially when we talk about sex and sexuality. The first time I opened up to them, they didn’t fully comprehend it, but I needed to do that at that time because I had started my advocacy journey and would not want them to stumble on my story from outside or another source. I chose to say it to them myself, and as it is.

Do you agree that improper dressing is the reason some girls are raped?

I disagree totally. The assumption that what a woman wears can provoke a man to rape her stems from rooted stereotypes about male and female sexuality. However, in reality, women are being raped or assaulted while wearing any type of clothing. No type of clothing is an invitation for sex or implies consent. What a woman was wearing when she was raped is simply not relevant. Rape is never the victim’s fault. An understanding that sex without consent is rape is the first step to change social attitudes that further harm rape victims.

What sanction do you recommend for the government to use to stem down the devilish pandemic called rape?

I strongly recommend public execution meted out to them. We need a highly deterrent law to curtail the act of rape; if not, it would continue and become a culture. Once it becomes a culture, nobody will be able to stop it. Well, this is just my candid opinion. Again as a therapist who understands that people are not their behaviour, I suggest that anyone found culpable, should be subjected to a psychological test with rehabilitation. Such an individual should also be sent to jail for 17 years with hard labour.

What was the work at Oshodi for?

It was exactly June last year that we started a programme called Sensitization Walk Against Rape and Sexual abuse every year. It was called Heart Minders Action Against Rape and Sexual Abuse (HAAROSA). We went to Oshodi to sensitize all about the dangers of rape. It was a successful programme that featured MC Oluomo who was at the forefront of the walk and it was a huge success. We got a lot of accolades for that project and as a roadmap we are still going to motor parks to speak to members of NURTW about the menace.  Again, we recently flagged off our campaign this year tagged Rape Not in My City. We asked people to send in a one minute video condemning rape and demanding justice. We also started a webinar with Community Development Councils virtually to educate parents, community leaders and care givers about child sexual abuse. All these are in a bid to continue sensitising people while adhering strictly to the current restriction mass gathering by the government.

Is there any low moment as an activist?

My lowest moment was the day I had to rescue a three-year-old girl who was raped by a 31-year-old neighbour. She had lost a lot of blood before we got to her, but God saved her. Looking at the girl as she goes through medicals at Mirabel Centre in LASUTH, I wept bitterly. What kind of creature rapes a child!

What about your highpoints in life?

I have so many high moments, both on the job and my personal life, too numerous to mention. In all, I am grateful to God for my many blessings and letdowns.

How do you balance the homefront with full timetable?

Coincidentally, I tagged this year my year of balance – Work, Play and Rest. I have learnt overtime to be present in different moments of my life. Whenever I’m at work, I concentrate, do my best and leave the rest and when I’m at home I am present with no distractions. I have learnt not to be a super woman at all times.

From a defenceless background, who is Funke Ijayekunle today?

I am growing professional in the coaching and speaking industry, a certified NLP and Emotional intelligence practitioner, and behavioural therapist, counsellor and mindfulness coach. I have records in establishing healthy relationships, entrepreneurial skills amongst teenagers and young adults as well as strong business communications. I have over nine years experience as a banker in two different banks in Nigeria where I was a customer service officer and contact centre team lead respectively. After holding leading positions as a project director and vice president of Junior Chamber International (Lagos Royale Chapter), a socio-political, non-governmental, but service oriented organization of young and active citizens, I have ever since given myself to human development project. I teach sex education in secondary schools in Lagos under Lagos Educational District 4 and 5 and currently manages a youth club called Heartminders Youth Club. Aside holding Masters,  Bachelors’ and ordinary National Diploma in Communication and Language Arts and Mass communication from Leicester University in England, University of Ibadan and the Polytechnic Ibadan respectively, I am also a graduate member of Nigeria In England of Institution of Public Relations.