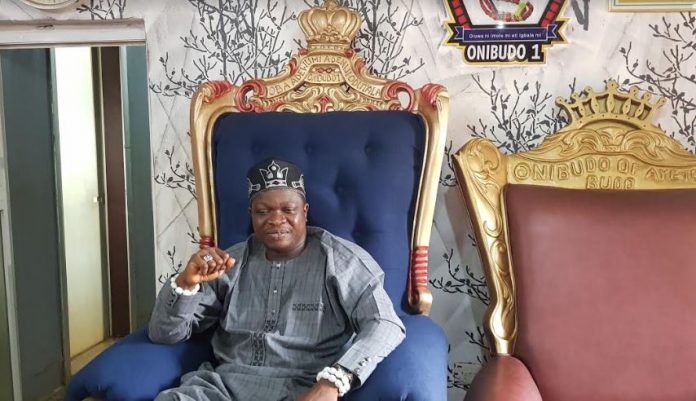 Oba Adewunmi Okanlawon Adeniji Odutala, the traditional ruler of Ayetoro Budo town in Itele, Ado-Odo, Ota Local Government Area of Ogun State, has declared that there is no community known or called Adogun Atele in Itele, Ayetoro and its environs, describing those brandishing the name as impostors and fraudsters who had no ancestral links with the seven land owning families in Itele.

He made the declaration during a media parley held in his palace to debunk what he termed misinformation and lies being peddled around by the fraudsters, claiming

ownership of all lands in Itele and environs, noting that anybody in possession of receipts bearing Adogun Atele or Itele family is invalid, as Itele is a name of a community and not a family.

The monarch claimed the briefing is necessitated by the need to put an end to all the spurious claims by those defrauded by the impostors, who now launched media campaigns that they were being dispossessed of their lands.

He said:”A retired Custom Officer Mr Fasanya and Sunday Nnamdi Nwosu were foremost amongst those defrauded by the illegal non-existing Adogun Atele family,who now launched a media campaign that they were being dispossessed of their lands.

“They failed to come for ratification and reconciliation with us who are the real land owners,rather they took us to court.They have taken us to court twice and their case have been struck out of court consecutively, because we had a subsisting judgement since 2005.”

Oba Adewunmi lamented the adverse effects of the fraudulent claims of the Adogun Atele or Itele family on the entire community, having been denied basic amenities for so long and could only hook up to the national electricity grid for the first time in 2014 via communal effort championed by him.

“People should disregard their mischievous moves,while we urge government to compel them to align with the judgement of the High Court which was also upheld by the Court of Appeal.

“Aiyetoro has possession since 2006,it should be respected until another pronouncement from a higher court surface,all we want is peaceful coexistence for noticeable developments to take place here.”

The King in consonance with notable Baales in the communities,cited several court rulings affirming their rightful hold on the land in question,where in the Adogun family has no visible or traceable ancestral links.

The fifth Baale of Lafenwa town, one of the 16 towns in Itele, Chief Safaru Tijani Edun while making his contribution on the matter,disclosed that historically the Ilegbede family one of seven land owning families in Itele and environs had the ruling of the Court of Appeal in 2005,which expressly stated that the right of occupancy/over and in respect of that piece or parcel of land being contended belongs to the Ilegbede family, followed by the issuance of a warrant of possession effected since 2006.

Safaru however,hinted that at no time did the self acclaimed Adogun Atele family existed as a land owning family in Itele since 1920 till date,adding that “they are misguided soldiers.

“Taoreed Mohammadu and those calling themselves Adogun Atele,Itele family with Balogun, their lawyer are the evil people in Itele land,if someone is coming with any positive development they used to charge such to court thus debarring progress.

“They debarred development here all the time they kept on dragging us to court even while a valid court ruling still subsists affirming our ownership.”

The Baba Oba Ayetoro Ibudo, Pastor John Durojaiye was quick to add that the forebears of the Adogun Atele family were mere refugees in Ayetoro.

“Their father sought refuge in Ayeroro having been displaced from Itele, five kilometres away from here.

“When he got here, he claimed he was being harassed in Itele and pleaded with our former Baale,Chief Simon Adesola Odutala for refuge having been chased out of Itele.

“After sometime he turned the story around saying his father owns all the lands here,none of his followers has a landed property here in Ayetoro.

“But he has sold 98 percent out of the 100 percent of lands here.” Oba Adewunmi assert.