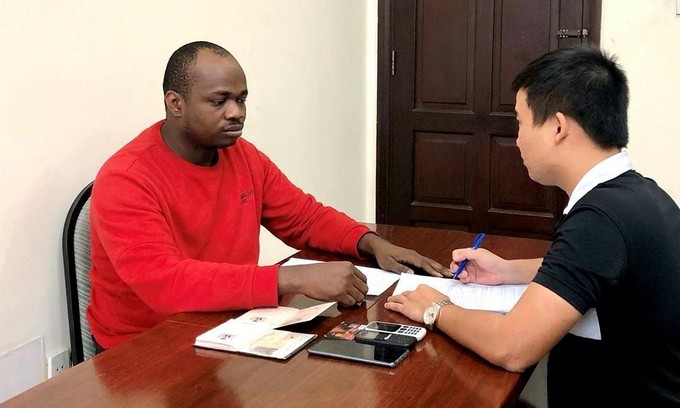 Seven Nigerian and four Vietnamese suspects have been arrested for cheating many people of more than VND120 billion ($5.2 million).

According to a Vietnam-based news website, VN Express, the suspects were arrested following investigations triggered by a complaint made in late April by a woman in Hue Town in central Vietnam.

The victim told the police that she’d been scammed online by a foreigner and ended up losing VND3.9 billion ($168,000).

In tracing the money, the police discovered it had been transferred into different bank accounts and withdrawn from different ATMs in Ho Chi Minh City.

Using testimony collected from these people, the police found and arrested Pham Ngoc Duy, who claimed to have bought bank accounts that he sold to the gang for VND7-8 million ($301-344) each.

Duy also helped this group to withdraw money at the ATMs for a two percent commission.

These three were not involved in the case involving the Hue victim but in many other fraud cases in the provinces of Tuyen Quang, Thanh Hoa, Nghe An and Quang Nam and HCMC.

All suspects were residing in HCMC. The timing of their arrests was not revealed.

Police in Thua Thien-Hue said the suspects were part of an international criminal organization that appropriated assets in close relationship with domestic accomplices.

Their kingpin is Dalaxy Dave, a Nigerian man currently in Cambodia, they added.

ALSO READ: FBI Arrests Another Batch Of 22 Nigerians For Credit Card Scam In US [FULL NAMES

According to the investigation, Daxaly used Facebook, Zalo, Whatsapp and other social media means to make friends with Vietnamese victims and gain their trust.

He also pretended to be a US soldier who sends expensive gifts to Vietnam and asked the victims to invest money in overseas businesses with him.

Daxaly also instructed the accomplices in Vietnam to hack the victims’ Facebook accounts, pretend to be the police and legal officials to make threatening phone calls, forcing them to deposit money into different accounts.

Using this modus operandi, they have appropriated VND120 billion ($5.2 million) from many victims across the country.

Police said they have found 71 bank accounts and more than 53 fake identification cards as well as multiple Facebook accounts associated with the crime, adding that the case is being investigated further.