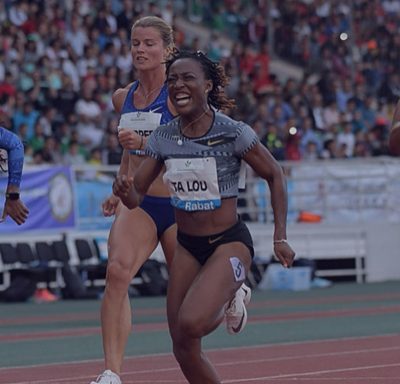 Ta Lou: I Run For All Of Africa And Future Generations

Ivorian sprint star Marie-Josée Ta Lou has said that she hopes to inspire the next generation of African champions with her success in the Diamond League and major championships.

Ta Lou, who came second in last year’s Rabat Diamond League and later broke the African 100m record in the same stadium as she swept to gold at the All-African Games, said she hoped to inspire others to go even further than her.

“I want to be a good role model,” she said in the Rabat edition of the Wanda Diamond League Call Room which is set to air on Facebook and Youtube at 18.00 GMT on Sunday.

“After I stop running, if somebody who becomes a champion later on says that they were inspired by watching me, that would make me really happy,” she said.

“It motivates me every time. I don’t run only for me, I run for all of Africa, for all the world, and for all the people who think they don’t have the chance to become a champion.”

Also Read: Osimhen Named In Ligue 1 Team Of The Season

“I know how far I have come, how many sacrifices I have made, so if I am inspiring other people today, that’s a reason to be better every day.”

Ta Lou also looked back on some of her memories from the Rabat meeting, the only Diamond League event on African soil.

She explained how she is staying happy and busy during the coronavirus crisis, and why she still needs to work on both her dip and her start if she is to hit form for the Olympics next year.

Check out the full interview in the Rabat edition of the Wanda Diamond League Call Room, live on Facebook and Youtube from 18.00 GMT this Sunday.