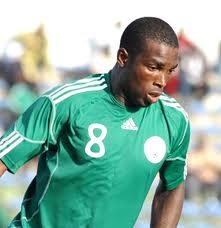 Ehiosun: Why Super Eagles 2012 AFCON Qualification Failure Remains One Of My Regrets In Football

Former Nigeria international Ekigho Ehiosun has revealed why the Super Eagles failure to qualify for the 2012 AFCON still remains one of his regrets as a footballer.

Playing inside the Abuja National stadium the Eagles needed to beat Guinea who had already qualified, in their last group game to book a place at the 2012 AFCON edition.

Unfortunately the Eagles were held to a 2-2 draw by the Guineans hence missing out of the tournament co-hosted by Equatorial Guinea and Gabon.

Ehiosun was in action for the Eagles against the Guineans after he was brought on for Joel Obi in the 67th minute.

And speaking to Brila FM on Wednesday, the 29-year-old striker said: “One of my biggest regrets in football was when the Eagles failed to qualify for the 2012 Cup of Nations under Samson Siasia.

“So I regretted that we didn’t qualify for that Nations Cup.”

Ehiosun made his Eagles debut in 2011 and made just six appearances scoring just one goal.

In July 2011, Ehiosun, moved to Turkish club
Samsunspor on a one-year contract, with the option of two more.

And on 3 August 2012, Turkish club Gençlerbirliği signed Ekigho on a three-year deal.