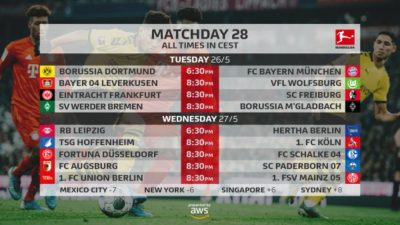 Meetings in Der Klassiker are always the must-see events of the year, and this time is no different: occupying the top two positions in the table, the perennial rivals are well aware that victory is likely to either make or break their respective title ambitions.

Bayern sit in pole position following their 5-2 win over Eintracht Frankfurt on Saturday, but Dortmund are just four points adrift after overcoming VfL Wolfsburg 2-0. Borussia Dortmund look set to be without injured talisman Marco Reus once again, but in Erling Haaland, Thorgan Hazard and Raphael Guerreiro – to name but a few – they still have plenty of in-form attackers to cause Bayern problems. Yet the visitors, with fit-again Robert Lewandowski eager to add to his Bundesliga-leading 27 goals this term, will not relinquish their grip on top spot easily, making for a mouth-watering encounter at the Signal Iduna Park.

With at least one of those two guaranteed to drop points, in-form Bayer 04 Leverkusen could make up ground in the standings. Sitting in fourth following their victory over Borussia Monchengladbach on Saturday, they go into their home clash with Wolfsburg having won 11 of their last 12 competitive outings and are spearheaded by Kai Havertz, who has five goals in his last three games playing in an
unfamiliar position as striker.

Elsewhere on Tuesday, both Gladbach and Freiburg will be looking to bounce back from defeats and get their quests for European qualification back on track when they travel to sides at the wrong end of the table in SV Werder Bremen and Frankfurt
respectively.

Wednesday’s Bundesliga action is headlined by high-flying RB Leipzig – fresh from their 5-0 triumph over 1. FSV Mainz 05 on Sunday – at home to a Hertha Berlin side that have hit the ground running under new coach Bruno Labbadia. With two wins, seven goals scored and two clean sheets since the restart, the Old Lady will be in a confident mood.

Elsewhere, TSG 1899 Hoffenheim and 1. FC Köln will go head-to-head in a bid to close the gap on the top six, while 16th-placed Fortuna Düsseldorf, who are without a win in three games, will look to boost their survival hopes against a goal-shy FC Schalke 04 outfit with just 33 goals on the board this term.

There will be a relegation six-pointer in Augsburg, where the 14th-placed home side have their sights set on a much-needed win against SC Paderborn, who are battling to avoid being cut adrift at the foot of the table.

1. FC Union Berlin have lost twice without scoring since Bundesliga action resumed, so they will be determined to get what has so far been an excellent maiden top flight campaign back in the groove when they welcome a struggling Mainz side to the Stadion An der Alten Försterei.