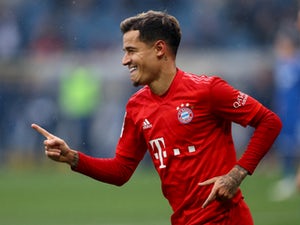 Premier League clubs Chelsea, Manchester United and Leicester have all reportedly contacted Philippe Coutinho’s agent ahead of a summer transfer.

Coutinho is currently on a season-long loan at Bayern Munich from Barcelona but faces a fight to return before the end of the season following ankle surgery.

Bayern have the option to make Coutinho’s move permanent but have been unwilling to meet Barceline’s £100million price tag.

Recent reports claimed Bayern manager Hansi Flick had been hoping to extend the Coutinho’s deal until the Champions League is completed later this summer.

Yet according to Mundo, Barcelona aim to have Coutinho sold by June 30, three days after Bayern’s final league game against Wolfsburg.

The LaLiga giants hope to recoup up to £71m from a bidding war between Premier League sides, with the player keen on a return to England’s top-flight.