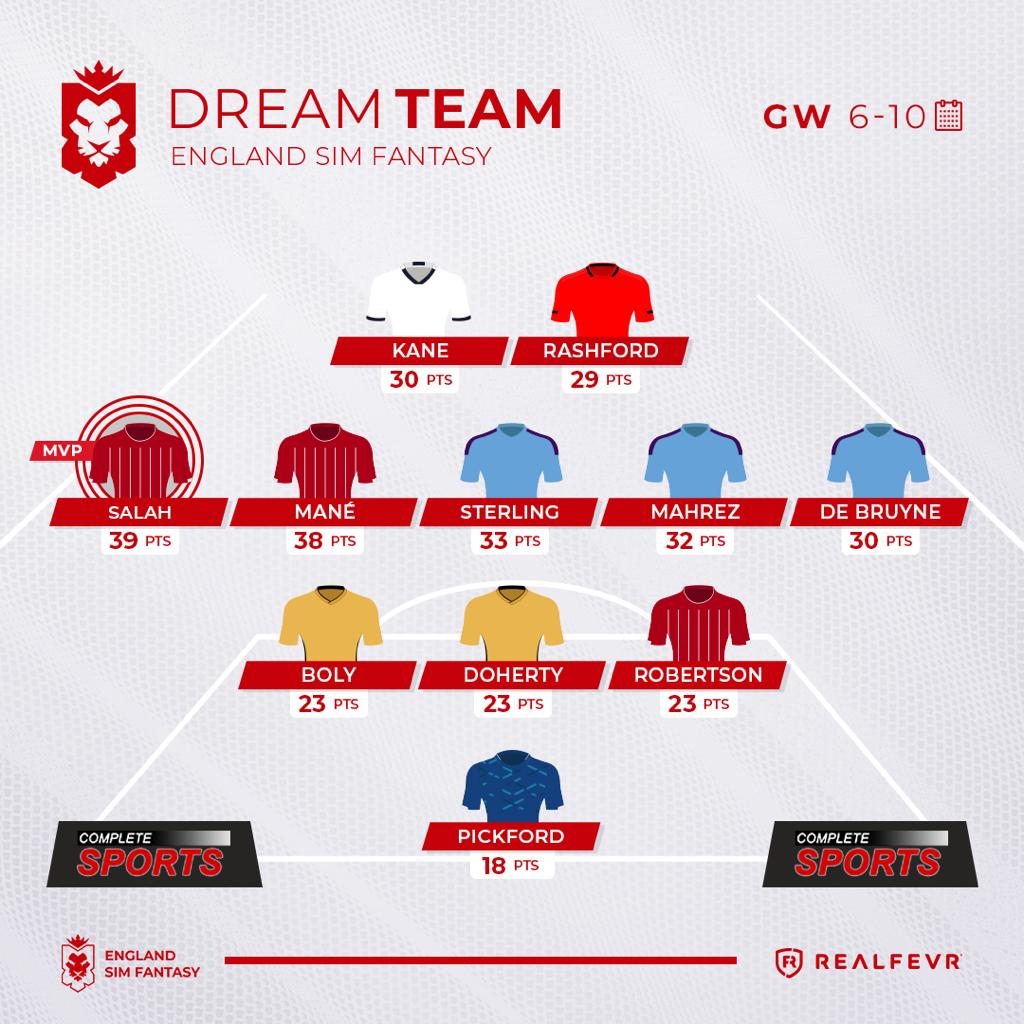 England Sim Fantasy, RealFevr’s first simulated Fantasy league, rolls on at an incredible pace! Today we bring you the highlights, goals and iconic moments from Gameweek 6 to Gameweek 10. In GW6, we had a Chelsea vs. Tottenham that didn’t disappoint, a match that produced 8 goals, as well as a surprising Newcastle home win against Arsenal and an even more surprising Sheffield United back-to-back wins.

The seventh round featured a Sterling brace at home, in another showcase of City’s offensive power, while Arsenal managed to turn around a two-goal deficit into a home win. Chelsea eked out a win off an early Giroud goal, but signs of trouble were already there. Problems continued to mount for the Blues in GW8 losing at Stamford Bridge against the Hammers, a shocking surprise.

Everton managed to scrape an away draw against Man United keeping in front of the Red Devils in the leaderboards. Highlights of the ninth gameweek were Arsenal’s and Chelsea’s wins, as they continued their fight to not fall behind Liverpool and City, both sailing away with comfortable wins in this round.

To close another week of England Sim Fantasy and another block of five rounds, Gameweek 10 had an Arsenal’s win at Stamford Bridge, settling the derby in their favour and moving up the standings, while Wolves held City to a draw at the Molineux, allowing for a Liverpool approach in the leaderboard.

The best performers from GW6 to GW10 line up in 3-5-2 Dream Team and represent 6 different clubs. Liverpool and Manchester City lead the way with 3 players each, Wolves had a nice run and managed to get 2 players in, while Tottenham, Man United and Everton join in with 1 player each.

Mo Salah was the MVP of the week, with an amazing 39 fantasy points. The Egyptian King scored in 4 of the 5 rounds, and his effectiveness has been a key part of Liverpool’s success.