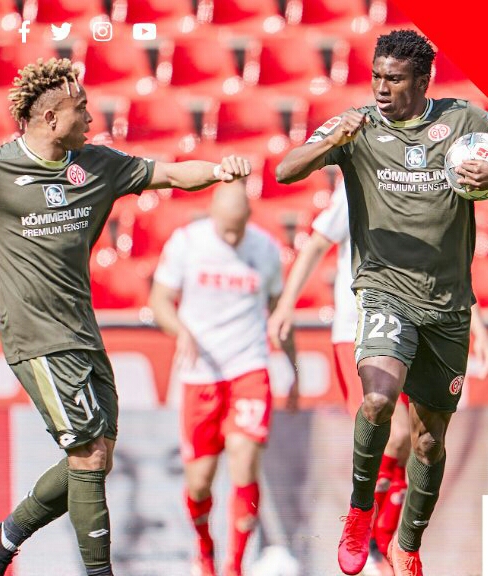 Taiwo Awoniyi scored his first league goal of the season for Mainz 05 as they fought back from 2-0 down to draw 2-2 away to FC Cologne in Sunday’s Bundesliga game, Completesports.com reports.

It was the second day of Bundesliga fixtures following the resumption of games which were suspended due to the coronavirus outbreak.

In action for Cologne was Super Eagles invitee Kingsley Ehizibue who was brought on in the 83rd minute, for his 24th league appearance.

Cologne had raced to a 2-0 lead through Mark Uth from the penalty spot on six minutes and Florian Kainz in the 53rd minute.

Awoniyi who was on the bench, came on in the 56th minute for his seventh league outing and began the comeback when he scored in the 61st minute.

And in the 72nd minute Mainz completed the comeback thanks to Pierre Kunde.

Also, in their first meeting in the league this season, Mainz came from a goal down to win 3-1.

The draw means Mainz are 15th on 27 points and four points away from the relegation play-off spot.

While Cologne occupy 10th position on 33 points and are six points from sixth place which is the Europa League qualification spot.