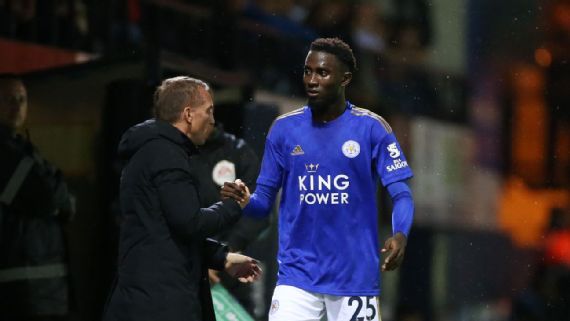 Ndidi: Leicester City Success Down To ‘ The Rodgers Effect’

Leicester City midfielder Wilfred Ndidi has heaped praise on his Foxes manager, stating that the club’s success this season is down to what he calls ‘the Brendan Rodgers effect’.

Before the coronavirus pandemic hit, Leicester had enjoyed an outstanding season, running neck and neck with league leaders Liverpool for parts of the season before yielding ground, and – assuming the season is completed — are in line to finish in the top four and qualify for the Champions League.

Ndidi is in no doubt about the reason for that.

“It’s the Brendan Rodgers effect,” he tells ESPN. “With him, it is not just about the eleven players and subs. Even the players in the under 23, he carries everybody along.

“So there is always space for anybody to fill in and to play. He is that kind of coach that always believes in the squad and not just one player. The main thing is the squad, the squad comes first.

“That is why we are doing very well, because we understand that we must always try our best. Where we are is because we work hard and try to improve all.

“There have been ups and downs, and there are still games after the lockdown and there are more points for us to try and get. For now, we are in a good position.”

Ndidi, who joined the Foxes after their fairytale Premier League title-winning season to replace N’Golo Kante, has become one of the division’s best midfielders, and he gives the credit to Rodgers.

He said: “No disrespect to other managers but kudos to Brendan Rodgers. He has done a lot of work on me. I remember the Chelsea game when (Mason) Mount took the ball from me and scored? That day made me a better player.

“The manager and the staff spoke to me. They made me understand what to do better and made me take it as a habit to do certain things. But he encouraged me to continue to play my game.

“The fact that he trusts and tries to improve the players is one thing. It is very difficult for a manager to come in and then dedicate himself to improving players, getting regular one on one meetings with players to help them make improvements.

“This is professional football, some teams won’t have that time for you to do all that. Everybody just focused on the business, they’re paying you for it and expect you to do the work. But Rodgers is different, very different.”