Osimhen Is The Future Of Napoli-Oliveira

Solskjaer Will Be Judged By Trophies At Man United -Sheringham

Arsenal Legend Adams: Why Smith Rowe Would Become A Better Player Than Saka

‘The Eye’ has been busy in the last 24 hours trying to track and pin down the man running Nigeria’s show at the Tokyo 2020 Olympics. He is the Minister of Sports, Chief Sunday Dare.

It is not so easy here to find him.
He leads the Nigerian delegation but he resides, along with all the other non-technical officials that are not directly working with the players, outside the Games Village. He stays in one of the officially delegated hotels in the city of Tokyo.

His accreditation is universal. It allows him unfettered access to all venues at all times.

7 days into his experience of the Tokyo 2020 Olympics it will be interesting to find out his impressions on several issues as a first timer to an Olympics.

Meanwhile, yesterday, ‘The Eye’ was hovering over the venue of the table tennis match involving Nigeria’s highest ranked player and highest ranked player in the world in Nigeria’s history, Quadri Aruna. Some two things caught the eye. Both things were most unusual. They occured during the match that involved Nigeria’s greatest hope in table tennis, Quadri Aruna who eventually and painfully lost to a player lower than him in the global rankings.

The first thing is that Aruna did not consult any coach during breaks throughout the match. He played entirely on his own steam, without the guidance of a third-eye looking at the match from a safe distance, guiding him through the humos and hurdles that make the difference in a very closely fought match. Such tips and advise make big difference in every game. It”s unusual to have a player without a coach. So, the big question was: where is Segun Toriola? He is the national coach that led the team of 5 players to the games. Why was he not at Aruna’s side during such a difficult match. Did that technical shortfall affect the match and the eventual outcome? 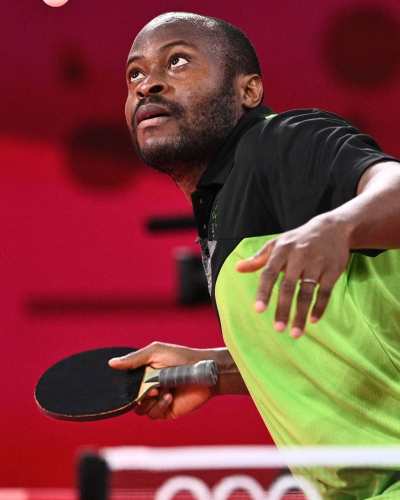 It is an abnormal situation that ‘the Eye’ observed from his invisible drone high up in the beautiful hall that had the Nigerian players and some officials who were silenced by the result and probably by what they knew that thebk rest of the world does not concerning the state of affairs in the Nigerian table tennis camp.

It is no longer news that Quadri Aruna lost the match that he could have won. The difference was very marginal. A single missed opportunity in table tennis makes a big difference.

The second observation was a poor picture that spoke volumes. After the match, Aruna noticeably stormed out of the hall. He was very angry at something – either with himself for his performance, or with something else that was not discernible to all those in the hall.

The devil must have been at work The spirit of friendliness that shines through every and all performances at the Olympics, win or lose a match, was missing in Aruna’s post match actions. He stood alone and apart, and walked away without acknowledging anyone from his Nigerian team. 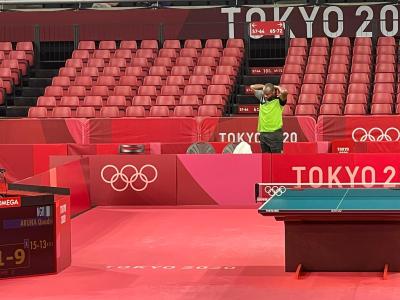 What could be the cause of this seething anger? Where was Segun Toriola, his coach, the coach of the national team, 7 time Olympian himself with all the invaluable experiences that could have helped Aruna through the testy moments of that match?

The bottom line is that Nigeria may be out of contention for anything in table tennis at Tokyo 2020, once again.

That must be one more thing agitating the mind of the Minister of Sports as the second half of the Games, when Nigeria’s main thrust for medals, starts in earnest.

Today, there is an additional worry about the games besides the thought of Covid that has receded in most minds here.

There is a weather report of a storm approaching Japan that could disrupt some of the Tokyo 2020 outdoor games for a day. This will be closely followed by the oppressive heat of summer for which Japan is well known.

Meanwhile,’ The Eye’ continues his watchout for Chief Sunday Dare.