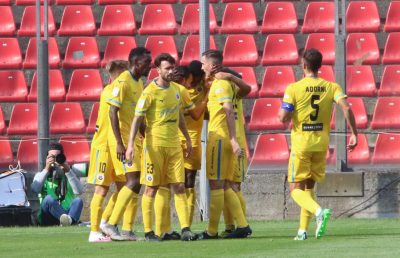 Italian-born Nigerian striker, Roberto Ibikun Ogunseye, has set out ambitiously, aiming at the Italian Serie B title with AS Cittadella, Completesports.com reports.

The 2020/2021 Serie B season got underway last weekend and Cittadella kicked off their campaign ambitiously with a 2-0 away win against Cremonese at the Estadio Giovanni Zini.

Ogunseye netted the first goal in the 22nd minute , while substitute Alessio Benedetti scored the second in the 81st. And Roberto Venturato’s team tops the 20-team Serie B after matchday-one.

Simply known as Roberto Ogunseye at Cittadella, the 25 year old striker was bought by Citta from Serie C side, Olbia, in January but arrived at the Veneto-based club only this summer.

Ogunseye was born in Mantova, Italy, in 1995 by Nigerian parents. It can be recalled that he granted an interview to Italian newspaper, La Nuova Sardegna, in 2017, in which he spoke about his roots and also about racism – unfortunately, a very frequent issue in Italy.

“I was born in Mantova by Nigerian parents, my father arrived in Italy in 1989 and my mother joined him in 1990. I attended all the schools in Italy and I have always had a good time, never any problems and I have not suffered episodes of racism. On the pitch it’s different, sometimes – we get too much insult from some stupid people. But I don’t try to get distracted, I stay focused on the game,” Ogunseye told La Nuova Sardegnain the interview.

Roberto Ogunseye celebrates a goal with AS Cittadella teammates

Ogunleye is a product of Inter Milan Youth team, but at a professional level, he had his first important experiences between 2013 and January 2017 in Serie D with Marano and Montebelluna and in Serie C with Prato, a Tuscan club very near to Inter. In those years, many young players went from Milan to Prato for grooming and playing experience.

Ogunseye scored some goals, but the turning point took place at the beginning of 2017 when he moved to Olbia. From February to June 2017 he made 10 appearances and scored three goals – numbers which persuaded the club to buy him from Inter.

At Olbia, in Sardegna, he became one of the most promising strikers, despite that the team always fought to retain their Serie C status.

Ogunseye played 94 matches for Olbia, and netted 31 goals. The last game he played for the club turned out as the most important. He scored in play-off against Giana Erminio. The first match ended 1-0 for Olbia, and in the return leg Ogunseye scored with head in 92nd minute and it ended 1-1, which ensured his team avoided relegation.

In this words he said an emotional goodbye to the Sardinian club: “Here I think I grew up not only as a football player, but also as a man. I understood a lot about myself, I certainly see life in a different way than I did when I turned 22. I leave a unique place with a baggage that makes me richer”.

Ogunseye has just started a new important step in his football career – the first season in Serie B, the second tier Italian league after Serie A.

Cittadella, a small city near Padova in the North East of Italy, is a perfect place to grow and improve without pressure. Many players have in fact blossomed from there.

Ogunseye will hope that his Sunday’s goal and great start in Serie B was only the first of many to come. Cittadella have a good tradition with strikers who exploded there, namely; Meggiorini, Ardemagni, Piovaccari, Gabbiadini, Kouamé, Moncini and Diaw. Ogunseye could be the next.

Up next for Cittadella is a Coppa Italia Second Round home match against Serie C (A) side, Novara Calcio, on Wednesday at the Stadio Pier Cesare Tombolato.