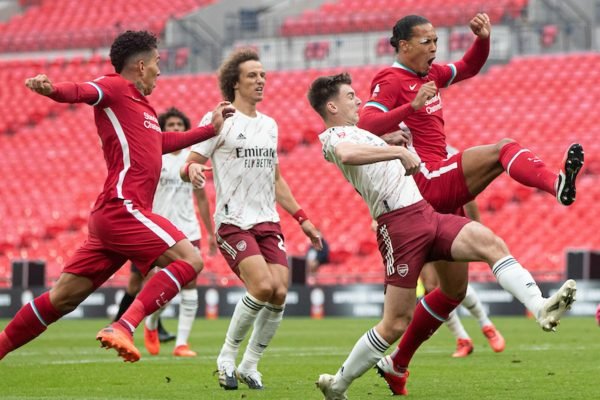 Arsenal will go into Monday’s clash against Liverpool with the hope to end their long unbeaten run in the Premier League at Anfield.

It is the first of two meetings between Liverpool and Arsenal in the space of four days as they will square off again in the Carabao Cup on Thursday.

Liverpool are unbeaten in their last 60 Premier League games stretching back to April 2017 – the third-longest such streak in English top-flight history.

Also, it means Liverpool are fast closing in on second place on that list, a 63-game run they managed themselves which ended in December 1980.

It is a big task for Arsenal as they search for a first Premier League win at Anfield since a 2-0 win back in 2012 following strikes from Lucas Podolski and Santi Cazorla.

Also Read: ‘He Is A Centre Forward Who Gives Us Depth’- Gattuso In Awe Of Osimhen Quality

However, the Gunners will be banking on their recent impressive form against the Reds after recording victories in their last two meetings in the league last season and the Community Shield.

Both sides have won two from two in the league so far this term, meaning that at least one of their perfect records must go in the final match of gameweek three.

The Gunners were convincing in their last away league game – a 3-0 triumph over Fulham on the opening day of the season – while winning at Leicester in midweek in the Carabao Cup, which will have only boosted the belief that their travel sickness is now a thing of the past.

Jurgen Klopp’s side did not look quite as invincible when they welcomed newly-promoted Leeds United to Merseyside in their last home game, surrendering the lead on three separate occasions before Mohamed Salah’s hat-trick heroics eventually sealed a 4-3 victory.

They have now conceded three or more goals in consecutive home league games for the first time since September 1982, and Arsenal will fancy their chances of causing them more problems with the firepower at their disposal.

Meanwhile, on the injury front Liverpool are without captain Jordan Henderson for this match after he failed to fully recover from the injury which forced him off at half time against Chelsea.

Summer signing Thiago Alcantara could be set for his full debut as a result but the Spaniard missed training on Saturday to raise doubts over his own involvement.

Also, Liverpool are sweating over the fitness of Alisson Becker after he alongside Alcantara picked up knocks in training.

There is better news elsewhere on the injury front with Joe Gomez expected to be available after returning to training on Friday.

Gomez missed out last weekend and was replaced at the heart of the defence by Fabinho, who impressed but could return to his more natural midfield role for this match.

James Milner is a major doubt due to a calf strain, while Joel Matip and Alex Oxlade-Chamberlain are both confirmed absentees.

Arsenal have a number of injury problems themselves, but Kieran Tierney is expected to be fit after pulling out in the warm-up ahead of last weekend’s win over West Ham.

The former Celtic star will likely take the place of Sead Kolasinac in the back three, although David Luiz is now available again too, which could free Tierney up to move to left wing-back.