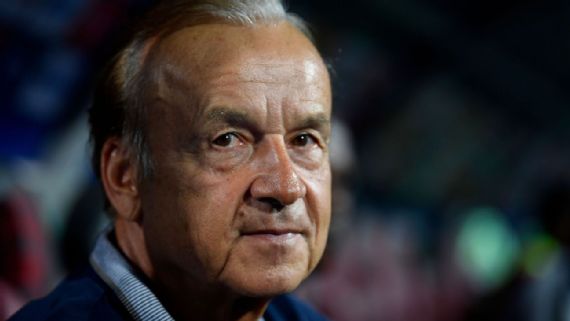 Ejuke was one of key stars In the Dutch league last season.

The winger linked up with CSKA Moscow from Eredivisie outfit Heerenveen last month.

He has scored once in three league outings for his new club this season.

Former Golden Eaglets captain Tijani, who is loan at TSV Hartberg from Red Bull Salzburg will also get the chance to play at the senior level for the first  time.

Lawal, 20, is a goalkeeper who plays for Austrian side Linz.

“I invited two players from Austria. One of them you know him, Samson Tijani. He was the captain of our under 17 team that played the World Cup last year,”Rohr told ESPN.

“He signed for Red Bull Salzburg, he is also midfielder 18 years old and he’s on the loan to TSV Hartberg, a first division club. But I’m not afraid to invite him especially because he’s in Austria already.

“Also, the goalkeeper, [20-year-old] Tobias Lawal. He’s a young goalkeeper, playing in Linz. He was on the bench for the European games. They had very good European rally last year, they made it good competition. And he played already sometimes, he was already in Austria [‘s side], under 20 but only a friendly.”

The Super Eagles will face the Elephants of Cote d’l voire on October 9 with other fixture against the Carthage Eagles of Tunisia to be held four days later.

Both games will be played at a yet to be named venue in Austria.