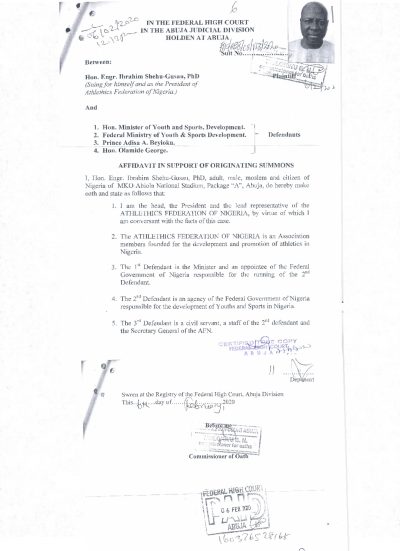 Incredible: Gusau Affirms Beyioku As AFN Sec. General In sworn Affidavit For Case Vs FMYSD, 3 Others

Prince Adeniyi Beyioku is the Substantive Secretary General of the Athletics Federation of Nigeria, AFN, according to Engr Ibrahim Gusau who was reinstated as president of the federation by the Federal High Court in Abuja last month.

Gusau, in a sworn affidavit he deposed to support his originating summons against the Federal Ministry of Youth and Sports Development [FMYSD] and three others affirmed Prince Beyioku,the third defendant in the case as the AFN Secretary General.

‘The third defendant is a civil servant, a staff of the second defendant and Secretary General of the AFN,’he wrote in the originating summons he swore to on February 6,2020 at the registry division of the Federal High Court, Abuja division.

The AFN president had erroneously failed to recognise Prince Beyioku as the AFN Secretary General last month when he (Beyioku) was posted to the federation as its new chief administrative and accounting officer in accordance with article 8.7.1 of the AFN constitution (2017 as amended) and 2017 Code of Governance as referenced by article 8.7.1 of the AFN constitution.

The AFN president went ahead to appoint one SY Pepple at an illegal congress as the Director General of the federation to carry out the functions of the Secretary General.

A bewildered media chief of the AFN, Dare Esan told our correspondent that the AFN constitution does not recognise the position of a Director General.

“This is becoming interesting. I think World Athletics need to see how it has been deceived into recognising Pepple who is not recognised by the statute (constitution) governing the administration of track and field in Nigeria,” said Esan who reveals the AFN president presented a new constitution approved at the illegal congress in Awka, Anambra state in December 2019 to World Athletics as the working document of the federation.

“Do you know that Gusau predicated his arguments in court on the provisions of the AFN constitution (2017 as amended) and actually tendered it in court in February 2020 as the statute of the federation where all officers of the AFN derive their powers from?.

‘PUMA confirmed in a letter addressed to Honourable Olamide George,AFN vice president in January 2020 that Gusau and Sunday Adeleye,AFN Technical Director at the time signed the sponsoring and licensing agreement on July 24,2019 on behalf of the AFN.

The AFN constitution (2017 as amended) also recognised the Secretary General (Prince Beyioku) as the custodian of all records,property and documents (which includes the PUMA contract) of the AFN,’Esan added.