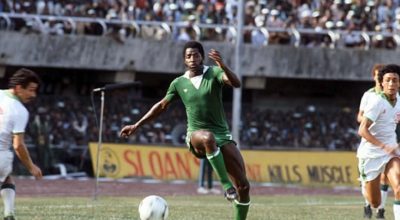 INTERVIEW – Odegbami: Eagles Should Be For Africa What Brazil Is For South America

Segun Odegbami is a Nigeria Football Legend. He won the 1980 Africa Cup of Nations with the Green Eagles – the first time by Nigeria. In this interview with Complete Sports’ SAB OSUJI, the former Nigeria captain reflects on his career, revealing that not playing in the FIFA World Cup remains the greatest ‘pain’ in his career.

The Mechanical Engineering graduate of The Polythechnic Ibadan who was thrice nominated for African Best Players for the CAF Player of the Year Award, but finished second (in 1980) and third (in 1977), says Nigeria has no justifiable reason whatsoever to miss out of the 2022 FIFA World Cup finals in Qatar. In his candid opinion, Nigeria is supposed to be to Africa, what Brazil is to South America as far as the global feast of football is concerned. He also speaks about the house, car and medal rewards former Nigerian President Shehu Aliyu Shagari gave the players after their 1980 AFCON conquest. The excerpts…

Complete Sports: Many have insinuated that not playing professional football in Europe highlights a shortfall in your illustrious playing career. What are your thoughts on this?

Odegbami: There was no shortfall in my football career. Yes, I didn’t get to play in Europe but that couldn’t in anyway be taken to be a shortfall. I played all my football here [in Nigeria] and it all ended here and well, if I must confess. So, not playing in Europe did not affect it [my career] in any way.

I attained the greatest height, even beyond Nigeria. Thrice I was listed for African Best Footballer Award. I came second on one occasion (1980) and third on another occasion (1977). I narrowly missed going to the World Cup which was the one that I really wanted, not playing in Europe. It wasn’t even really fanciful (then) to play in Europe.

Segun ‘Mathematical’ Odegbami takes on Algerian defenders during the final of the 1980 Africa Cup of Nations at the National Stadium, Surulere, Lagos. The Green Eagles won 3-0 to lift Nigeria’s first ever AFCON title

You became one of the Green Eagles players that won the Nations Cup for Nigeria following the 3-0 win against Algeria in the final on March 22 1980. On that occasion, President Shehu Shagari hung a gold medal on your neck for that historic feat. Where is that medal forty years and four months after?

And you were also given a house in Festac Town, Lagos, on that glorious night by a delighted President Shehu Shagari. Are you still living in that house or…?

Since I moved out of Festac Town, I had no need of the house any more. My children are not here, my family is not here too. Though I have a new family here, but we don’t live in that (Festac) part of town. So, it just doesn’t make any sense keeping it. So I sold it.

As for the 504 Saloon Car, we used it until it grounded.

That’s very interesting. But between not playing in the FIFA World Cup and not being able to become the NFF President, which is more painful to Chief Patrick Olusegun Odegbami?

This is a very, very, interesting question. Well, not going to the World Cup actually pained me a great deal. That’s personal and I wish I had gone [to the World Cup] at least to experience it. But it never happened. So that one pained me, it really hurt. But not becoming the President of the Nigeria Football Federation, NFF, that’s Nigeria’s loss, not my (personal) loss. I didn’t aspire to become NFF President to gain anything personal, but to add my quota to the development of the game of football in the country. So, that’s Nigeria’s loss, nothing really changed for me as far as NFF Presidency was concerned.

Looking at the composition of the present Super Eagles, would it be a surprise if the team go all the way to lift the 2022 African Cup of Nations?

It won’t be a surprise at all. The Eagles always stand a very good chance once it is in Africa. In fact, we should be winning the Nations Cup every time because if we do what we need to do well and we fail to win it, then something must have gone wrong. Some times, when our team doesn’t seem okay, we still get to the final or semi final. So, to win it in 2022 will not be a surprise at all.

And 2022 is also a FIFA World Cup year. Does this your optimism of 2022 AFCON success transcend to Eagles’ Qatar 2022 World Cup qualification? 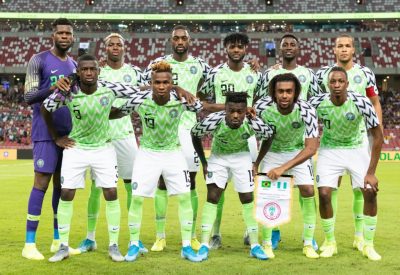 Victor Osimhen, Samuel Chukwueze, Wilfred Ndidi, Alex Iwobi and Samuel Kalu are Nigeria’s top pick at the moment. Amongst them who would you pick as the best of the moment?

I don’t rate players like that. But truth is that they are great Ambassadors of Nigerian Football at the moment, all of them; Chukwueze, Osimhen, Ndidi, Kalu and Iwobi.

Since 2000, Nigerian player has not won the prestigious CAF African Player of the Year Award. What, in the considered view of ‘Mathematical’ Odegbami is responsible for this?

It is very clear that we haven’t had the kind of quality players compared to those that have won it for the country – Ikpeba, Amuneke, Kanu, to showcase for the CAF Awards. It’s a reflection of the quality of players that we’ve been producing of recent. We have not been able to replicate what we did when the likes of J.J Okochas, Victor Ikpebas, Nwankwo Kanus, Emmanuel Amunekes, Sunday Olisehs came up, fully expressing themselves in the game and developing their full content of the African Football and adding to it the European content to make up what they eventually became. So, we are not producing that large number of exceptionally gifted players any more.

But it appears we have a new generation coming up now. And if after this post Covid-19 thing, we do what we are supposed to do, that what this Covid-19 is going to make us do to concentrate on developing the game locally, to get players locally from here, who could now join with experiences in Europe and become truly exceptional players. I see a few of them in the horizon, and it is not impossible in the next one or two years for one or two Nigerian players to actually qualify to be African Player of the Year.

It appears Nigeria has lost that ‘fear factor’ which saw other countries develop cold feet each time they were to come up against the Super Eagles, even at club level. How could this be remedied?

These days, our players have forgotten their ‘Nigerianess’ that has physicality that we combine with our great speed, power and skills. Now, we try to be too much fanciful, we try to be ‘cosmetic’, too much passing of the ball and not enough of the flamboyance, showmanship that defines Nigerian football. We are no longer using our strength and speed that we used to make people (opponents) fear us. I remember one move that Ahmed Musa should have made during the 2018 FIFA World Cup in Russia. If it were during our time, after failing to make that move when you had the whole field ahead of you with only defender to run to and defeat (dribble), he would have been removed from the team. So, you see, we are no longer using our strength and speed enough, that’s why.