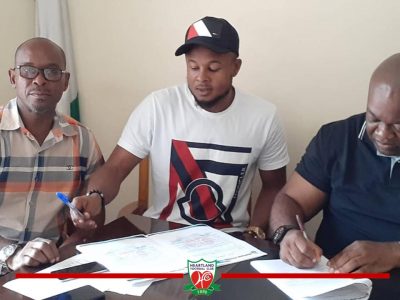 Blurring The Line Between Sports And Employment Contracts

As a young striker, Ugo Obi’s agility and impressive control over the ball on the football field quickly distinguished him from his peers. His ability to wriggle his way past energetic defenders and score from any distance was second to none. This reputation eventually earned him a five-year contract with Tutuplatu FC, a tier 1 football club playing in the Nigerian Professional Football League (NPFL).

In the first two years of his contract, all seemed well and there was no report of clash between Ugo and the management of his new team. By the fourth year however, the amiable relationship between Ugo and the management of Tutuplatu FC turned sour. The genesis of the fall out began during Tutuplatu’s League Cup final against Shawcross FC where Ugo sustained a hamstring injury in the early stages of the game. Tutuplatu lost the cup final; but this was only the beginning of their woes. Their real nightmare came a week after the game when the medical report confirmed that their star athlete, Ugo, would be unable to play for at least 8 months. The news came as a major blow and threatened Tutuplatu’s position as league leaders.

Whilst battling with recovery and depression as a result of his injury, Ugo got wind of a shocking discovery; Tutuplatu intends to abruptly terminate his contract. Ugo found it difficult to come to grips with the information considering that he might have healed faster assuming Tutuplatu did not fail in disbursing his injury allowance making him financially incapable of affording proper medical treatment. With this in mind, Ugo has decided to take formal steps against the club in an action for breach of the fundamental conditions of his service, that is, failure to pay his injury allowance as indicated in the terms of his contract. Ugo has now engaged the law firm of Smith & Rothman LP to review his options and explore available remedies.

With a clear line of action in perspective for Ugo and his team of lawyers, they are ready to initiate formal steps to address Ugo’s grievances but there is a major setback. The dispute resolution clause in Ugo’s contract provides as follows:

If there is any dispute between the Club and the Player, the Player, shall, in the first instance give a 30 days’ notice to the Club management stating grounds of dispute and if at the expiration of the 30-day period, the dispute has not been resolved, the player may refer the matter to arbitration under the Arbitration and Conciliation Act (ACA) 2004.

As straightforward as this clause appears, it raises a lot of issues particularly as to the nature of sports contracts and the appropriate method of resolving employment disputes arising from sports contracts.

Sports Contract of Employment in Nigeria

Generally, a footballer’s contract of employment is one with employer-employee flavour. Contrary to popular opinion, club managements in reality exercise a considerable measure of control over their players in terms of the player’s fitness, exclusivity, adherence to club rules and discipline and these are some of the factors that have assisted the Courts (in high profile cases like Walker v Crystal Palace Football Club Ltd and Singh v National Review Board) in reaching the conclusion that sport officials, referees, managers, player etc. may be categorized as employees and not independent contractors as many presume.

Due to the decision of both local and international Courts, it is now firmly established that professional sports players are employees and are therefore governed by the rules of employment law which offer statutory employment protection rights including the right to recover unpaid emoluments.

The consequence of any sports contract with employment flavour is that it is the NICN [National Industrial Court of Nigeria] that will have the exclusive jurisdiction in Nigeria to hear and determine employment disputes resulting from such contract. This authority to resolve work-related conflict is conferred on the NICN by virtue of Section 254C of the Constitution of the Federal Republic of Nigeria (1999 as amended) (the “Constitution) and even where parties attempt to by themselves extend this exclusive jurisdiction to arbitration by introducing dispute resolution arbitration clauses in the sports contract, such attempt will fail.

A detailed analysis of the ACA also reveals that nothing in its provisions contemplates the NICN enforcing an award arising from an arbitral panel set up to determine sports-employment issues. The ACA specifically acknowledges only the High Courts (Federal and State) as the forum for the recognition and enforcement of its awards and by this, should an arbitral award be obtained in respect of a sports-employment related issue, the NICN (which is the Court with exclusive jurisdiction to hear employment matters) will lack the power to enforce such award.

The above position was affirmed in Giuseppe Francesco E. Ravelli v. Digitsteel Integrated Services Limited . In this case, one of the parties to a contract had approached the NICN requesting that the Court exercise its discretion in appointing arbitrators to resolve the parties’ dispute. In this regard, Hon. Justice Kanyip held clearly that the intention of the ACA was to resolve commercial disputes and not disputes arising from labour and employment issues and this remains the prevailing decision in Nigeria concerning the incorporation of arbitration proceedings in employment disputes.

In a different dimension and with an element of twist to the foregoing, the world football governing body (FIFA) just released the June 2020 revised Regulations on the Transfer and Status of Players (RSTP). Its Article 22b discusses the competence of FIFA to adjudicate on sports dispute and specifically states that: “Without prejudice to the right of any player or club to seek redress before a civil court for employment-related disputes, FIFA is competent to hear…employment related disputes between a club and a player of an international dimension…”

Furthermore, by the same Article 22 (b), parties to the employment related dispute have the choice to ventilate their disparity before an independent arbitration tribunal established at national level within the framework of the Association and/or a collective bargaining agreement provided however that, the arbitration clause must have been included directly in the contract of employment/applicable collective bargaining agreement. A combined reading of Article 22 (b) and Article 24 reveals that the FIFA Dispute Resolution Chambers would have jurisdiction over disputes arising from player contracts with an international dimension. This special provision came in to play recently when FIFA placed a transfer ban on Rivers United over their breach of employment contract between the club and Samuel Akurugu, a Ghanaian International footballer . Applying the provisions of Article 22(b) and 24 to Ugo’s contract, it may therefore seem that the dispute resolution clause (with arbitration provisions) in Ugo’s contract would be effective if Ugo were an international player as in Akurugu’s case.

Is Section D of the NPFL Framework & Rules Legally Binding/Unconstitutional?

Article 59 of the FIFA Statutes generally prohibits the commencement of sports disputes before the regular courts by Member Associations and affiliated bodies. In a bid to comply with this provision, the NPFL Framework and Rules provides that the Arbitration Committee of the Nigeria Football Federation (NFF) shall have the jurisdiction to address all trade disputes between a player and a club and that decisions of the Committee shall be final and binding on all parties concerned .

The Constitution which is the Supreme law of the land and to wit any law inconsistent with its provisions shall be void has provided in its Section 254C that the NICN has exclusive jurisdiction to determine labour-related issues. That said, Section D of the NPFL Framework Rules which purports to confer jurisdiction on the arbitration committee of the NFF to resolve labour issues arising from the sports contract is clearly in contravention of the Constitution and as such void. In sum, the NPFL Framework Rules cannot oust the jurisdiction of the NICN over labour matters arising from sports relationship.

Perhaps the two most important reasons why emphasis is placed on arbitration as an alternative dispute resolution mechanism in sports contract is the commendable speed at which issues are resolved and the privacy it offers unlike public exposure from court sittings.

Although the philosophy underpinning the inclusion of arbitration clauses in sports employment contracts is understandable, there is no doubt that the NICN has over the years displayed a great deal of efficiency and dedication in resolving labour disputes. To be certain, the NICN encourages resolution of employment related disputes through its court-assisted ADR mechanisms. The ADR Centre of the NICN uses mediation and/or conciliation technique(s) to assist parties resolve their dispute and arrive at a mutually acceptable agreement.

While it is comforting to know that provisions are in place for Alternative Dispute Resolution (ADR) assisted mechanisms, it may be more reassuring to stakeholders in the commercial world if they are aware that in addition to the NICN’s ADR assisted mechanisms, there are specialized tribunals/committees with required resources and professionally trained adjudicators to determine employment disputes arising from complex sports transaction for which expert skill sets are required.

Where parties to such commercial transaction are still not satisfied with the decision of this special tribunal, they may have the option of requesting that the dispute be transferred to the general industrial court for regular court proceedings.

The NICN is capable of creating this special branch or constitute this special class of tribunal by relying on Section 254 (C) (3) and (4) of the CFRN which essentially provides that the NICN may establish an ADR center for the speedy dispensation of justice provided that nothing shall prevent the NICN from exercising supervisory control over the awards, decisions, ruling etc. made by the arbitral tribunal, commission, administrative body or designated board of inquiry.

In all, the following lessons may deduced from the story of Ugo’s contract and the issues arising therefrom:

1. Professional players are not in all cases independent contractors reason being that sports contracts are generally drafted with the intention that the club exercises a reasonable amount of control over the player. As such, most sports contract can largely be classified as employment contracts and the players are therefore entitled to statutory employment rights and protection offered by the NICN;

2. The NICN is the proper Court with constitutional authority to resolve sports-employment related disputes (exempting those with statutory flavour) and even when it may be appealing at the initial stages of a sports contract of employment to include arbitration as the mode of resolving disputes, parties must carefully consider their choice and the possibility that such clause may be unenforceable;

3. Finally, it is only with expert legal advice from skilled lawyers in the areas of sports and employment law that players and their clubs can navigate the murky waters of sports employment contracts and other related agreements.