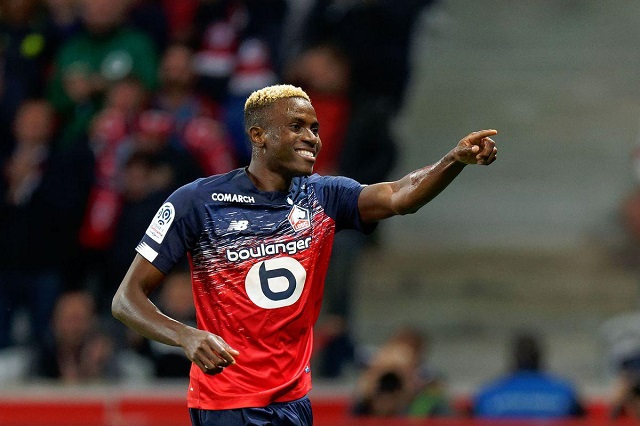 French online news hub, La Voix du Nord in this piece highlights the different factors that are making Nigeria international striker Victor Osimhen’s current transfer situation so complex. The forward passed a medical with Napoli, but the deal is still not done. Why? And why have things taken so much longer than Lille anticipated?

A week ago, Victor Osimhen formally parted ways with agent Jean-Gerard Benoit Czajka, who had been looking after the Nigerian forward’s interests since he was 14. The outlet claims that the player did not appreciate the way that Czajka was conducting negotiations with Napoli. Sources tell Get French Football News that Osimhen was pressured into making the agent switch by Lille owner Gerard Lopez. His new agent, William D’Avila, currently manages the careers of a number of Nigerian talents in Ligue 1, including Samuel Kalu (Bordeaux), Henry Onyekuru (Monaco), Moses Simon (Nantes) and Abou Outtara (Lille). As a result, contract talks between Napoli and the player’s camp had to start again from virtually zero.

In Napoli’s line of attack, they are going to have to make space for the Nigerian. The club are inclined to move Polish striker Arkadiusz Milik (26) on in order to make way for him, owing to the player’s injury record.

Because Napoli need to free up a non-EU spot

Like in France, Italian clubs are limited in the number of non-EU players that they can harbour in their squad. 21-year-old attacker Leandrinho and Mexican winger Hirving Lozano could be brought to depart. An exit from Senegalese central defender Kalidou Koulibaly would also free up a space. The local French outlet claims that City made an offer of around €65m, but this was not enough for Napoli.

Because Osimhen just lost his father

At the end of June, the Nigerian striker faced the pain of losing his father. For a week, he was in Nigeria to attend the funeral. During this period of time, negotiations were stopped.

Because the eventual fee will be large

Gérard Lopez remains convinced that he will earn Les Dogues €81m from the sale of Osimhen. In Italy, the claims are that the deal will be done for around €60m instead. A 6-year contract, worth between €4m to €5m a year, has also been drawn up for Osimhen, but Napoli are still negotiating finer details with William D’Avila. There is still the matter of image rights and remuneration of present and past agents to be resolved. The outlet claims that Napoli boss Gennaro Gattuso has even offered to take a wage cut personally if it helps get the move through.

Because Napoli are not alone in their interest from Osimhen

Since 13th July, Victor Osimhen has been exclusively in negotiations with Napoli. If the deal continues to drag, other big European clubs could come in: Inter Milan, Liverpool and Manchester United are the clubs that the outlet mentions.